I love my kitchen.

I'm the family cook and a good or great kitchen is essential to my well-being.

I love my kitchen.

My kitchen has two entrances and a central island.  It has bright lighting and lots of storage space.  The central island sports a gas cooktop and the double oven is self-cleaning upper and lower.  The Bosch dishwasher is totally silent.

My kitchen is perfect.

Well, my attitude to cooking is affected by my environment.  When it's good, I'm good.  I've done my best cooking here:  Julia Child, Robert Carrier, Gordon Ramsay - you name it, I've cooked 'em.  Right here.  In a great environment.

Twenty years ago we were looking to move to a bigger house.  After many many visits our realtor took me here and as soon as I walked into the kitchen I knew this was the place.  Although the house was way out of our price range, the total perfectness of the kitchen was too much to simply ignore.  We improvised some creative financing and, twenty years later, here we are.

Such magnificent feasts and parties we have produced!  It's been a great experience and I feel joy every time I walk into my perfect kitchen.
Posted by Bill at 8:36 PM 6 comments:

Dad was an Army Captain in the 864th Engineering Battalion, Ft. Lewis, Washington, and served in the South Pacific from 1943 to 1946. Dad did not talk about the war and the only story we had was that he fell on a basketball court and skinned his nose requiring medical treatment. Ha, ha, what a lark it must have been!
Not so. I found out years later after he died what he and the 200 men in his command endured. The Army engineers supported the infrastructure on captured islands and bases held by the Marines. They built and repaired airstrips, by hand, built and maintained roads, hospitals and landing points. They did this while under constant enemy fire, bombings, attacks and in an environment where disease could incapacitate half the company.
Here are some excerpts from a daily diary written by one of the "grunts" under Dad's command. It was no cake walk and Dad never told us a thing:
Nov. 24, 1943 Lae (New Guinea)
The men are becoming uneasy. 7 Zeroes attacked one of our Liberators but were driven off. We saw the bombay doors open up and the men ready to bail out. Then the bombays closed and it made a beautiful forced landing. They didn't bail out because one of the pilots was shot in the head. Another raid at 9:15, but our Ack Ack drove them off. Boy, those J's got nerve.
Nov. 28, 1943
Back to working on hospital buildings ... concrete floors ... those sacks of cement weigh 94 lbs each. We work very hard on a 6 hour on, and 6 hour off schedule.
Dec. 3, 1943
The 808 and 864th made history today. we completed the 28 mile road from Lae to Nabzad with a loss of only 3 men., Most of our outfit is stationed here at Lae. Some of our heavy equipment operators are at Mandana and a few located at Finnschaven. Red alert tonight ... no casualties.
Dec. 17, 1943
Our advanced bulldozer and grader operators are back from Rumu Valley. They were really shot up. Five of the men from One Company and 3 from B Company aren't coming back. The big D-12 Cat was grenaded. What a mess! Things were pretty sad tonight. Hellped Peterdson splice a wire to repair his guitar. A Liberty ship with some troops just came in. We will be travelling soon with just our field packs.
Jan 16, 1944
Built another bridge and a light proof hut for developing photos. The mud out here is really bad. When some one dies or gets killed, they roll them into a matress cover and toss them into a deep hole. At 1:30 AM 2 personnel bombs were dropped, ripping holes into the air strip and killing 4 CB's and wounding 18. Goddamn, our radar had screwed and they caught us with our lights on and our pants down ... much damage was done. 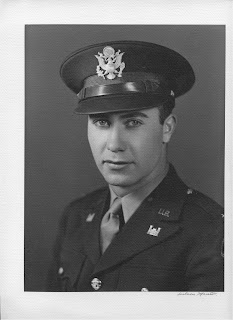 
Every morning I get a wake-up call by this guy, Q the Cat.

Q is our rescue cat, "res CUE" being the origin of his name.

I give Mr. Q a lot of deference because of the hard life and near death experience he had as a kitten.  Mr. Q is special and I treat him specially.

Q has always been a hungry cat and he get's hungry some time between midnight and 6 AM.  He will let me know that he's ready for chow by a nip to the elbow or a gentle paw to my head.

If anything, Q is very polite.  He paws me or nips me gently letting me know he's up for some Tuna.

Of course, I respond.  It's become a nightly ritual for a YEAR!  I get up, have a drink of water, stumble around to find the cat food, feed Q and go back to bed.  He never bugs me after that.

I don't begrudge Q's nocturnal habits.  After all, Q had a hard life and nearly died at the hands of uncaring, despicable people.  It is my honor to give the little guy some Kat Fud in the dead of night. 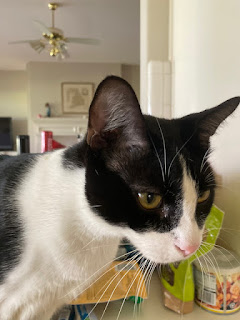 Yes, that we would like to have a new "look" to the Master Bathroom and Closets, update the fixtures, install LED's and new plumbing.

No, for the mess.

Well, you can't have one without the other.

So much has changed since our house was built.  New shower and bathroom fixtures, lighting, flooring and stuff like heated towel rails.

Alas, by staying at fancy hotels in recent years we have been exposed to the possible which led us to the impossible decision of having a major room in our house re-done.

Our builder, an amazing and very modern person, was able to take pictures of our current very large master bathroom and superimpose his model of the transformation.  Truly astounding!  The tile, the lighting, the cabinets and the plumbing fixtures all laid out in color and 3-D.

I say let the jackhammering begin!  More later.
Posted by Bill at 7:14 PM No comments:

Really.  Nitrogen tires is a thing?

The story is that nitrogen filled tires leak less (who knew) and are less prone to temperature change.  The first part may be true but the second is definitely not!  When the temperature in Texas dropped from a normal 90-degrees F to 50, my tires went from 35 psi to 29 psi, triggering the "low pressure" sensor thus causing the car to scream, "Low Pressure!  Low Pressure!"

Nothing I could do about it.  I don't have a nitrogen compressor in my garage.

The service manager was quite jolly about it.  "We get this all the time in winter.  No big deal.  Just bring your car in and we'll top up those tires no charge.

Sure enough, 10 minutes later I was on my way riding on 35 psi of nitrogen and not a care in the world.  Yeah, now I pity the little people who have to exist on common air.  How awful their lives must be.


Q the Cat thinks that rolls of paper are a great thing to play with.  Can't say I disagree!

Q is the only cat we have lived with who plays with paper rolls:  toilet paper (of course!) and paper towels.

I say they are fair game and if it brings a little joy into his life, all the better. 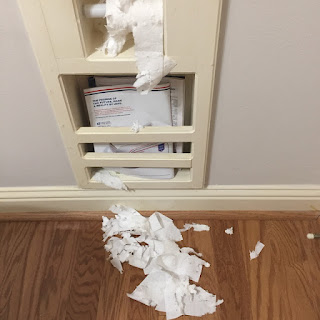 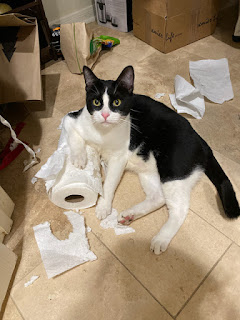