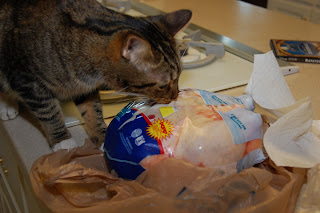 We'll celebrate Kink's arrival in our household in a few weeks.

This is Kink's month, though. It's his celebration of being rescued from the Animal Shelter and moving to a home where he would be given good food, lots of fun and an older cat, Sandy, to torment while being taught the ropes of CatHood.

Kink stretches himself out across the bottom part of my laptop, right across the trackpad, on top of the part where the battery is the warmest. I try to type across his body hoping he doesn't twitch and delete everything I've written.

Sometimes he sits up and watches the screen as I type. Occasionally he'll paw at the screen and I'll agree to change a word or two. Kink has turned into a great editor.

Occasionally? How about "once in a while?" More familiar, less pretentious.

The Year of Rome

A few years ago my good friend, designer, photographer, web guru, adventurer and all-round extraordinary person, Beth Cherry, introduced me to the concept of a theme for a year. Unlike New Year's resolutions, the theme is an attempt to set the tone for the upcoming year, sort of like expectations.

I tried it a few times and found it fun and useful to have a theme for a year. Last year I didn't decide on a theme and the year was definitely adrift. In retrospect I named 2007 the Year Adrift.

Actually, I had one major goal for 2007 and that was to attend the 21st World Scout Jamboree in England as a staff member and that I did. But, the remainder of the year consisted, basically, of "before jamboree" and "after jamboree."

For 2008 I have a theme in mind and it comes from a strange source: NetFlix. Last year Claire enrolled me in NetFlix as a "gift" and signed me up for an initial subscription of movies. NetFlix is a subscription service that delivers CD's by request and you can queue up a bunch of CD's to be delivered in sequence as you receive them, watch them and return them.

According to the old maxim, Rome wasn't built in a day.

That is to say, rather than trying to accomplish a big project in a short time, it might be better to accomplish a greater number of smaller projects over a longer period of time.

For example, rather than spending an entire weekend cleaning up the garage, why not spend a few hours over several weekends to do the same thing.

The idea is to spend a small amount of time each day on a small project around the house or on the job in the hopes of making a big impact in the long run. Normal maintenance things don't count, so doing the laundry is not Roman, while grouting the bathroom sink is definitely Roman.

Well, that's the theory, at least.

And, who knows? We might end the year with a Twelve Two Two Fondue toga party! Definitely Roman.
Posted by Bill at 12:30 AM No comments:

Happy Birthday to Me!

Middle age is that time in life when one's broad mind and narrow waist change places.

That explains a lot.

Just under the wire!

This is the Year of Rome.

Rome wasn't built in a day, they say. Thus, this is the year of many small projects leading to - Rome!
Posted by Bill at 11:56 PM 1 comment: