The witches pulled into the parking lot and piled out of their cars.

They all laughed, even the cold one.

“Tonight’s the night!” said one, and they all broke into a Phil Collins song.

The trail up to the cave was easy to follow, lit by a full moon. The witches laughed at the Park Service sign reading, “Enter Cave at Your Own Risk.”

“Once we’re in there it will be THEY’RE own risk!” They all laughed, although some nervously.

The witches shuffled up the trail to the cave. The trail was wide and even, thanks to the Park Service, but, even so, some of the witches felt a shortness of breath as they climbed towards the cave.

“Whew, I definitely need to get back to the gym!” They all laughed.

Although the entrance to the cave was somewhat small the cave itself was surprisingly large with enough room for several hundred witches. The five who entered the cave had room to spare.

The first witch entering the cave carried a battery powered lantern which she turned on casting weird shadows on the walls of the cave as the rest of the witches entered.

“Well, here we all are,” announced the witch with the lantern, “All Hallows Eve. Let the Las Cruces Crucible come to order!”

The witches clapped in appreciation and looked at each other in anticipation.

“Settle down, settle down,” the head witch extolled, her hands held out and waving the witches to be seated, “All in good time, all in good time. Now, who brought the caldron? Great, and the burner? Fine, and the other stuff? Fantastic.” Each witch on cue raised her hand and pointed to her offerings.

Then, without much bother the witches set up their fire, caldron, offerings and settled down to an evening of incantations and fun.

After a few rounds of beers and tequila shots the witches were feeling quite merry indeed. No one noticed that the caldron was bubbling fiercely and throwing off a few green sparks.

Feeling very merry indeed the witches danced around the caldron and with each turn was given a shot of tequila. Dance, shot, dance, shot!

They drew close to the caldron.

Suddenly, the caldron became red hot, glowing incandescent and from the center rose as if to fill the cave ...

Sarah woke up in her car, sitting in the driver’s seat, clutching the steering wheel. It took her an hour to unclutch her fingers and it was only then that she noticed that her clothes were singed. Sarah remembered fire and screaming and something else.

Something that came out of the caldron.

She remembered running for the cave entrance and scrambling out, running blindly across the desert to the car park. Then nothing. She blanked out.

She looked around. All the other cars were gone, so, maybe everyone else went home and she slept the night in her car.

Humph, Sarah thought, they left me here. Some friends. And she drove home.

In the subsequent year Sarah tried to call her friends in the coven but it seems that all had disappeared without leaving a forwarding address. Furthermore, Sarah observed, she lost all interest in tequila.

“Devil’s brew,” she would tell her friends, then shiver for an hour.
Posted by Bill at 8:23 PM No comments:

Conversation with an Artist 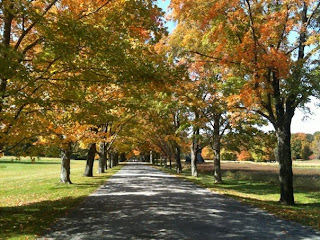 Me: So, you see, this is trees on a road. Autumnal etc. What the eye sees, the finite. HOWEVER, the Soul sees Hipstamatic. The indefinite..

Artist: lol. you're such a hipsta poet.

Me: You infected me. I'm not seeking a cure.

Me: I thought you would not be.

Artist: you thought not wrong

Me: Jayse, I can't hold a candle to you, although if I dripped red wax on you I'd totally photograph it in Hipstamatic ... Lucifer and Ina's 1969. Yeah, that would be cool.
Posted by Bill at 7:43 PM No comments: