Beware Inspiration summer is here! As I reviewed my pitiful blog-not output for July my willpower and resolve suddenly kicked into high gear inspiring me to do…nothing. To the sounds of lawn mowers in the distance and the pitiful screams of money being annihilated like antimatter by the air-conditioner straining to maintain the temperature indoors at a comfortable 42 F, I faded into unconsciousness (again) my ultimate thoughts being “Mañana, there’s always mañana.”

So, dusting off the old Writer’s Almanac I checked out the Handy Hints When Inspiration Doesn’t Strike chapter and read the following:

Capital idea, I thought. A review. That should be, er, exciting. Let’s hope. Turning to the archives I checked out what was happening one year ago.

Well, isn’t that special, writer’s block isn’t a disease; it’s an Annual Holiday. Great. I hereby decree that all writers shall take off the month of July every year and save our readers a lot of frustration by not getting their daily dose of withering wit and insightful insight.

Write a review. To summarize this idea would be to write about writer’s block, which defeats the purpose of writer’s block to begin with, so why bother?

OK, this isn’t so much a secret as it is a Law of Nature. The quickest way out of a supermarket is to select the most experienced checker even if that queue is longer. The reason? Produce. You have to learn to Pick Right.

Blah! Inspiration, Golden Snitch thou, eludes my grasp! I have no secrets; the advice is dross.

3. Describe what’s happening at this moment.

I listened. Lawn mowers, leaf blowers, edgers, trimmers and saws. Lots of lawn care going on and no wonder. July in Houston and the grass grows behind you as you mow it. I looked out the window and the Lawnmower Man was doing his thing. Who wants to read about lawn mowing? Restless, I turned the page.

4. Take a nap and try again another day.

Speaker of the House

Years ago I bought a pair of these. 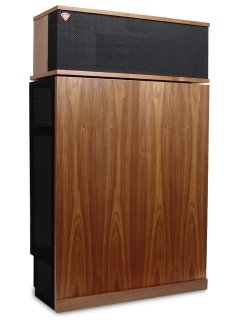 Yes, humongous speakers. What was I thinking? Well, great sound for a start. In my humble opinion, Klipsch makes the best audio speakers on the planet if not the Universe. The K-Horn is a corner speaker and, yes, I did design and build a house to accommodate these beasts. Surprisingly the K-Horns only require about 2 Watts of power which means you don't need a beefy stereo system to power them. Au contraire, a beefy stereo system will bring the roof down at an output setting of 2 out of 10.

So what drives these monsters today? What brings the roof down with Metallica and Aerosmith?

An iPod. Yep, my little iPod transmitting through an iTrip FM adapter presents my entire audio collecton to the Klipsch as if I had a 500 CD changer.

It's quite a shock to see the little iPod sitting on top of the 4-foot tall K-Horn speaker! Alas.

Recently I added an Apple Airport Express which allows me to transmit to the stereo from any Macintosh on my home network. So, the iMac upstairs, the MacBook down stairs or the iPod can be the life of the party.

As for my CD collection, it's in a box. Somewhere.

Learn more about the Klipsch legend:
From The Klipsch Website

Audio pioneer and company founder Paul W. Klipsch launched the Klipschorn loudspeaker in 1946 to enable people, for the first time ever, to experience the power, detail and emotion of a live performance at home.

Considered a watershed industry event, the introduction of the Klipschorn set the standard for high sensitivity, wide dynamic range, low distortion, and smooth frequency response. These principles, which drive the creation of every single Klipsch loudspeaker, are what make the Klipschorn as sought after today as it was decades ago.

As the only speaker in the world to be in continuous production for 60 years, the Klipschorn has remained relatively unchanged since its inception. In 2005, the company made some minor cosmetic and functional revisions to this legendary speaker, including the elimination of the inset collar, or spacer, between the upper and lower cabinets for a cleaner aesthetic appearance. A horizontal wall seal was added to improve the low frequency horn's response accuracy.

A Matter of Scale

The cartoon cat, Garfield, cracks me up every time he gets on his bathroom scale.

The scale says “Are you glad to see me or do you always carry a whale in your pocket?” and half-chewed Kix and milk go spewing across the table. (Yes, breakfast with me can be an adventure.)

Talking scales! Only in the comics.

Our bathroom scale is on its last legs, he said innocently. The truth is it’s been on its last legs for about 10 years, now. But, you know, in the grand scheme of things something like a bathroom scale that’s a little on the malfunctiony side takes a long time to ripen into a problem that I’m going to get around to fixing.

And if you think the bathroom scale problem is bad you should see our “light bulb to burned-out light bulb” ratio. Not a pretty sight, which, unfortunately you’d be unable to see at all at night.

So, there I was at Tar-zhay buying windshield wiper blades to fix a problem that had suddenly become overripe due to a threat of receiving 3,650 phone calls over the next decade like the one I just received by a person who obviously hasn’t learned to drive through a thunderstorm by instinct rather than visually, when a floor display caught my attention.

Bathroom Scales – All Digital – On Sale!

Actually, all I saw was “Digital – On Sale” and I went into some kind of trance and drifted over for a closer look. In the back of my mind I heard a voice whispering “last legs, last legs” and a vision of our poor, demented bathroom scale swam into view.

Poor thing, our scale developed a mental problem early in life and you never knew if you’d weigh 150 or 180. Imagine starting the
South Beach Diet on Monday, lose 30 pounds by Tuesday, and gain it all back on Wednesday? It had its advantages in that you could step on and step off, step on and step off and eventually get a reading you could live with.

So, really our poor, demented bathroom scale was a pretty good deal, especially if you’re not that concerned about reality.

Of course, all those thoughts came later. At the moment I was under the influence of a powerful narcotic: Digital – On Sale.

Yep, that’s all I needed to know: Digital – On Sale.

I would have bought two but only one remained on the display. Quickly I snatched up my prize and sprinted to the check-out pausing only briefly to pick up a set of camouflage-patterned bath towels, also on sale, that I’m sure would delight my daughter.

Pleased with my thoughtfulness I returned home, unpacked the new scale, made a quick trip back to the store for some batteries, returned again and powered up my new scale which was, dare I say it, digital and on sale.

I pressed the button to boot the system and watched the display eagerly.

The usual stuff. I clicked “OK.”

There was a short pause while the boot sequence continued. I took the opportunity to fix myself a sandwich and brew a cup of tea. When I returned the Setup Wizard was just starting.

>The following series of questions will enable your Microsoft WinScales to provide you the very best Weight Display experience. Please answer honestly.

>Are you trying to lose weight?

>Do you wear an excessive amount of black?

>Do you avoid horizontal stripes?

>Describe your most recent meal.
Kate Moss salad. No dressing.

I stepped on the scale and waited. A little hour glass appeared and spun for a while. I watched a moth fly around the light. Finally, the scale spoke.

Spoke? Yes, spoke. I looked down at the digital readout and gasped but it wasn’t me who exclaimed “Oh, my God! Look at your weight! What have you been doing?” It was the scale.

Next, I heard “Accessing WinShop…”

Momentarily, the scale recited its report.

“According to WinShop records you’ve been purchasing Ben and Jerry’s Funky Monkey at a prodigious rate. And Cheetos. You’re not dipping Cheetos in Funky Monkey, are you? Do you have any idea how many calories that is? Per Cheeto?”

I shifted my stance and managed a weak “no.”

“LIAR!!” the scales shouted, “My sensors detect increased blood flow to your right big toe indicating prevarication. Are you a prevaricator as well as a Big Fat Pig?”

A wave of panic washed over me. The room was hot. I couldn’t breathe. I looked around for a way out. A vision of empty Cheeto bags and Funky Monkey cartons filled my mind. Gingerly, I stepped off the scale.

I wasn’t gingerly enough. The scale lit up and shouted, “Where do you think you’re going, Cheeto Boy. Get back on here! You’re going to learn about celery and lo-cal dairy products and how lying makes you fat! Move it, Chunks, or I’ll, or I’ll…”

And at that very moment, terrified as I was, a thought struck me. “Or I’ll what?” Huh, or what, exactly, is a scale going to do to me.

Emboldened, I picked up the scale and headed to the kitchen.

“Hey, put me down! What do you think you’re doing, ya big galoot?” the scale protested.

The scale was still lecturing. “Oh, look at this. Cream and butter. Looks like you have quite a problem. And all these red meat purchases. Are you allergic to fish? And sausage! You can’t be eating sausage! This is so un-South-Beach. You’re a hazard to the mission, Dave.”

Once in the kitchen I put the scale on the table and opened up the battery compartment.

The scale calmed down. “What do you think you’re doing, Dave?” it asked.

“We can work this out, Dave. You’re not all that overweight. I admit, I was too critical.”

I removed a battery.

“Dave, you don’t have to do this. You can have Funky Monkey and Cheetos in moderation. And sausage. I can help you, Dave.”

I removed the second battery.

I removed the third battery.

I removed the last remaining battery.

The scale’s display constricted down to a small, glowing red dot which brightened briefly and went out.

I stared at the scale for a while then grabbed a bag of Cheetos, a bowl and made my way to the freezer.

“Hey, I hear you bought a new scale.”

“I think it looks like our old scale but cleaned up.”

“Well, looks are deceiving and, besides, scale technology doesn’t change all that much. Check it out.”

I crossed my fingers and my toes.

“Oh, look at this, I’m down ten pounds! I thought I felt lighter!”