We thought we lost it.

We had a couple of frosts this winter and after each frost more leaves turned brown. Then, they started to drop. After the big wind in February most of the leaves were gone and we had this stick that used to be a tree. OK, a very skinny tree, but considering it started as a refugee from a bowl of guacamole it was doing fine, just fine. 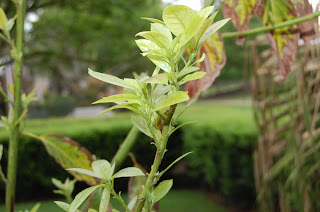 I hope it grows lots and lots of leaves this summer. Millions and billions of leaves!

You need to eat more vegetables, she said.

Since when, she said?

Since this morning, he said.

I smell bacon, she said.

You’re having an olfactory hallucination, he said.

No meat for the rest of the week, she said.

I mean it and you’d better produce something good, she said.

It so happened that just that very day an interesting recipe had been posted on one of the prime food blogs that just might fill the bill. Vegetarian and with no spices. Hmmm, no spices? What’s up with that?

The dish is called “mujadara” and it derives its wonderful flavor from caramelized onions combined with lentils and basmati rice.

You can read all about it at Orangette but I’ll provide the blueprint here.

You’ll need a couple of onions (I used red Spanish onions as I would for onion soup), a cup of lentils, half a cup of rice and some olive oil and salt. That’s it.

Chop the onions into small pieces and fry them in about a quarter cup of olive oil until they’re golden brown, same as you would for onion soup. Scrape and turn, scrape and turn for about 20 minutes until the onions are golden, brown and possibly black in spots. Cooking the onions thoroughly is essential to this recipe.

While this is going on, as if you have nothing better to do, cover the lentils with about an inch of water in a saucepan, bring to a boil and simmer, covered, for about 20 minutes. You probably won’t need to drain them and I wouldn’t bother because of what happens next.

Add the rice to the onions and mix it up. Add the lentils, a teaspoon of salt, two cups of water, mix well, bring to a boil then simmer for 20-30 minutes.

I was a little worried that the recipe didn’t call for garlic or black pepper or cumin or curry powder, but I needn’t have been concerned.

This is the best thing you’ve ever cooked, she said.

You always say that, he said.

Yeah, but this time I really mean it, she said.

He said nothing but thought, “Thanks, Molly!” 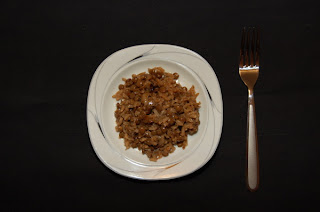 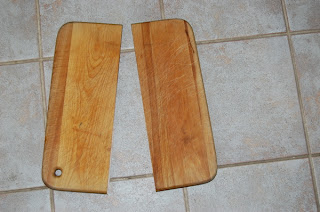 I don't know how he did it. The cutting board weighed as much as he did and it was sitting flat on the counter. I heard the crash and went into the kitchen in time to see Kink pawing playfully at the remains.

Just as well. I "need" to go to Williams-Sonoma, anyway! I need a new cutting board, yep, and a new sauce pan, a knife (can't have too many knives. I always say that.) and one of those French things that I don't know exactly what it does but it's French and I could probably use it. Somehow.
Posted by Bill at 1:36 PM 2 comments: 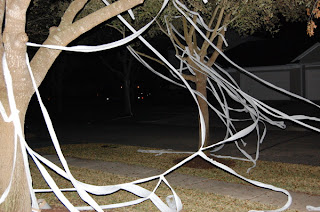 But, the question is why? Why would anybody roll us? We have no kids in high school. We live in an ordinary house on an ordinary street in an ordinary subdivision. So why pick our pitiful trees from which to hang toilet paper?

On the plus side, I gathered up about a months supply so Woot to that!

Ouch, No and Owww!

What a smart kitty!

New with Kink is sharpness. He is sharp in mind and claw. I caught him the other day sharpening his claws on a tree, after which he honed them to razor sharpness with his teeth.

Silly me, I thought he was flossing.

What happened to you?

What do you mean “nothing,” you look like you went through a shredder?

Please! It’s not like I get a transfusion every day. I mean, once a month, isn’t that the norm?

What’s to be done with a sharp, playful kitten with razor sharp claws and teeth and did I mention sharp?

Number One: Avoid confrontation. When confronted with a sharp kitten, the sharp kitten will win. Back away slowly and chant “Nice kitty, nice kitty.”

Number Three: Assert yourself! You’re the king of the house! Act like one. Failing this fall back to Number Two and Number One.

I’d write more but I have to staunch a recent wound to my ankle. And feed Kink who’s looking a little famished in spite of my blood dripping off his left fang.
Posted by Bill at 10:40 PM 1 comment:

In a few hours I will be up to my eyeballs in young chefs hopefully learning some of the basics of cooking.

It was a moment of madness that I agreed to serve as Merit Badge counsellor for Cooking, but, hopefully, by this time tomorrow some of the 40 young men who take my course will be more confident in the kitchen, at the camp stove or around a fire.

In addition to Health and Safety I'll try to impart some basic knowledge about food and our relationship with it, how to season lightly, when time in the pot is necessary and how to pack lightly while eating well.

My kitchen is strewn with bags of chopped food, trail mix, charcoal and plasic bags. At the end of the day tomorrow I will have supervised the cooking of over 150 meals. Don't people get paid for this sort of thing? Naw, that would ruin the adventure!

p.s. Kink is laying on the keyboard and I'm having to "mouse" around him which is sort of weird if you think about it too much.
Posted by Bill at 11:36 PM 1 comment:

Seems Reasonable to Me

I had a plan. I had it all mapped out. With all the time in the world I would do this and that, go here and there, have my people call your people and we'd do lunch.

Shiny objects are my bane and I confess that I've been attracted by them. Chalk it up to no discipline and no willpower. Where did it go? I used to have both, at least a little bit.

Well, it's time to get back on track. March is Blog-a-Day month, go to the gym month and clean the garage month.