There's a lot to be said for a good hamburger.

There are local variations that include chilis, mushrooms, onions, sauerkraut and, "Excuse me, but do you happen to have some Grey Poupon?"

The basics are simple. Good meat cooked well and accompaniments.

So, why do I feel slighted after preparing a grand Hamburger Dinner to contrast it with what the cats ate?

The cats had Tuna Florentine and Chicken Tuscany, with a side order of Succulent Ocean Bits and washed down with L'eau de Houston 2009.

For some reason my hamburger tasted a little dry.
Posted by Bill at 8:27 PM 1 comment:

The Four Stages of Leak

There are Two Universal Truths:

You may have noticed that this posting is not titled "The Four Stages of Crack."

It all started with noticing that part of the front yard was damper than other parts of the front yard where things were dying for lack of water. We had cactus to the east and a jungle to the west. At first we thought it was a misaligned sprinkler head, which we corrected, but the damp spot got damper. And Damper. And DAMPER. AND WETTER!!

Recently, the damp spot turned into a pond.

More recently, the pond turned into a lake.

Very recently, I have been having a good time fishing carp and bass out of our lake until it was pointed out to me that I should not be fishing in my own front yard, unless I had lakefront property, which I don't. (Damn! I'll have to cancel that boat order.)

I called my plumber whom I HEART and told him "I think I have a problem."

Of course, I've never called my plumber just to wish him a good day or to tell him the Houston Texans are sure to win the Super Bowl. (I'll probably NEVER make THAT call.) Anyway ...

My plumber arrived, surveyed the property and pronounced those fateful words one dreads to hear, "I'm pregnant."

This was it: You have a small leak.

I'm sort of torqued off that Niagara Falls and the Grand Canyon didn't have to call a plumber!

Seriously, what's up with that???

To make a long and sordid story short, the leak appeared to be where the City Water supply joins the house.

"Appeared." That is, not *exactly* identified. After hours of digging in the mud why was that? Well,

Unfortunately for me, the builder, now sunning himself in Acapulco I suspect, situated that connection underneath the concrete slabs that support our multi-ton air conditioning compressors.

Yes, the water supply connection is located under concrete.

To give you a clue, one of the proposed fixes involved helicopters. Skyhooks. Seriously. Airbourne Plumbers.

I had no idea. I think they construct their parachutes out of $100 bills. Apparently they're light and strong but fall somewhat faster than chutes made out of Euros.

Now we're going through the Four Stages of Leak.

The first stage is Shock. What? A leak? Where? OMG!!!! Leeeeeaaaaaakkkkkkkk!

The second stage is Denial. It's not a real leak. It's runoff. The neighbor watered our yard as a prank. It's always been like that.

The fourth stage is Acceptance. OK, here's my checkbook, Visa card, first born and car. Let me know when it's over. Be gentle. 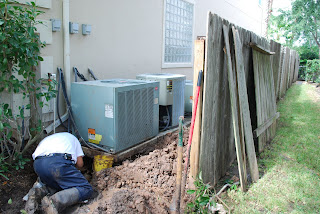 We are somewhere between Stage 1 and Stage 2.

My friend, Genevieve, reports from the South Pole.

Yes, she lives at the South Pole.

In case you're thinking of going down there to cool off, better check this out!