We've discussed this before.

Shrimp with Mussels in Aspic

Breasts of Duck and Chicken confit


Yeah, the cats eat better than we do. Tonight we had leftover soup and stale tortillas.

Actually, I could go for some of those Kat Snax about now.
Posted by Bill at 9:44 PM 2 comments:

Thanks Ed of Logan, Utah!

WITH ALL CAPS I TYPE
LOUDLY I YELL EVERYTHING
I FEEL IMPORTANT!
Posted by Bill at 5:09 PM 1 comment:

I spent last week in San Francisco attending Macworld Expo. I stayed at the Westin downtown which has a concierge to direct you to the Other Concierge. They don't just put a mint on your pillow, you're entire pillow is a mint. I gained five pounds without venturing outside of my room.

There was an in-room French Maid! Uh, no, on second thought there wasn't. I "made" that up. Ha Ha. Ix-nay on the aid-may.

What San Fran lacks in hills and fog it makes up in food, and there were restaurants INSIDE of restaurants. Ridiculous.

Here's the blueprint for the week:

Don't recall seeing either a rice or a roni. Maybe next time.
Posted by Bill at 9:52 PM 4 comments: 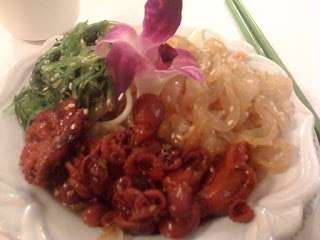 Where Are the Anti-Gravity Belts?

This can’t be the end of the decade because I distinctly remember standing on the balcony, popping champagne corks to welcome the New Year 2000!

That was yesterday. Wasn’t it? WASN’T IT?

Could nine years have gone by like pfffffffft without me noticing?

We’re getting into serious digits in this 2000 thing. This is the Last Year of the Single Digit and it won’t come back for a long, long time.

It’s the Future, you know. Should be.

Stupid Future. Always teasing, never quite delivering. I’ve got a miserable cold. Stupid cold. Where’s the stupid cure for the stupid common cold? Huh? Should be easy. Been talking about it for a couple of centuries.

Just this week, Jack-in-the-Box came out with a new “tasty treat” consisting of a hamburger, order of fries AND ...

How cool is that? A full hamburger lunch PLUS a couple of tacos just in case you have an empty space to fill between your larynx and esophagus. Just tamp ‘em down. That will probably go down as the Great Invention of 2009 and they year is young!

Oh, and I checked, no Anti-Gravity Belts. Now, that would be a fun Happy Toy. And useful.
Posted by Bill at 7:18 PM 5 comments: