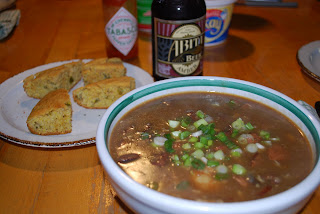 Serve with Creole Boiled Rice, crusty French Bread, and a good cold beer (I like Dixie or Abita Amber). Garnish with green onions, and the parsley.
Posted by Bill at 2:06 PM 4 comments:

It is with great and profound sadness that I report the death by cancer of my friend Bill Moran.

I knew that Bill had been ill for several years and travelled from his home in south Texas to Houston for treatment. We planned many lunch dates only to be broken by extended treatment schedules or other inconvenient circumstances and, in fact, we never met one-to-one.

Regardless, I considered Bill a friend, confident, mentor and collaborator for all things food-related. We traded recipes, gave tips on new restaurants and discussed several books we would write about southwestern cuisine.

Now, that's all gone like blowing out the candles on a birthday cake. Where there was light and laughter only smoke remains.

I don't know how long Bill's website, The Texas Chef will be up but it's worth a visit to read his recipes and get a sense of who the man was. He was passionate about that unique combination of Mexico and food and his love for flavorful, homestyle cooking will hopefully live on.

Happy trails, Bill, and pay attention when they say "the plate is hot." 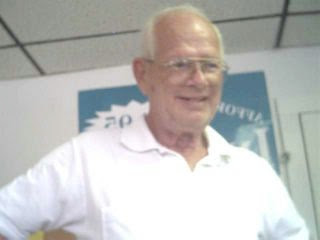 Twelve Two Two Fondue is back on top, Google Number One hit for the phrase:

We had dropped to Number Two after a real snake rental shop in Zaire made a brief foray into the Intertubes. However, as of today the competition has slithered off into the brush.

Hey, don't knock it. At least we're Number One in something!
Posted by Bill at 7:50 PM 2 comments:

Kudos from Twelve Two Two Fondue to United Airlines for making things right with Dave Carroll (see below) and his broken guitar saga.

United Airlines will donate $3000 to a musical charity helping kids.

Furthermore and unexpectedly, Taylor Guitars is making a personal donation to Dave and the Sons of Maxwell in the form of a few musical instruments. Good on you, Taylor, you were the good guys all along!

Dave Carroll, we are not worthy. You asked yourself the question "What can I do about this situation" and came up with a solution that highlighted the problem, put forth your point of view and left the "answer" wide open.

Now, if it's not too much to ask, do you think you could write a song about a Barky Dog?
Posted by Bill at 7:52 PM No comments:

They say that Revenge is a dish best served cold, but here's an example that's sweet and hot.

Musician Dave Carroll with the Sons of Maxwell were traveling on United Airlines to Nebraska via Chicago O'Hare when passengers noticed baggage handlers throwing guitar cases.

Turns out they broke Dave's guitar and his heart.

United Airlines admitted fault, but Dave was finally told after a year of chasing red herrings and wild geese that he would not be compensated for his loss.

So, Dave promised the last person to finally say "no" to compensation (Ms. Irlweg) that he would write and produce three songs chronicling his experience.

Hello, United Airlines, they say that any publicity is good publicity. I'm not so sure about that!