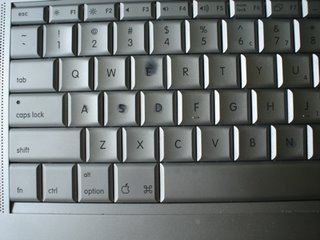 The tone was accusatory. “You didn’t buy another computer, did you?”

Historically, I heard, ‘You didn’t chop down that cherry tree, George, did you?”

Thinking fast, a gift of the habitually accused, I replied, “Uh…”

Curse you slow brain-speech pathway, I thought, albeit slowly.

“Uh, I, I, I, didn’t buy another computer per se.” (I always like to toss in a bit of Latin just to throw them off the scent.)

I held up the afflicted PowerBook and, sure enough, the E Key had been obliterated, ostensibly by writing too many blog entries using words containing the Letter E. Like ‘entries’, that’s two E’s right there! Oops, too more in ‘there.’ It’s a veritable E Epidemic.

“Doesn’t Apple sell E Keys?” came the next logical question, but I was prepared.

“I checked on that and, yes, they do. Only like most stuff nowadays there are some attachments.”

“What kind of attachments?”

“So, you just bought the Key Board?”

“And what does ‘basically’ include?”

“So, you didn’t buy another PowerBook?”

In an instant I saw my loophole and dived through it like a duck chasing a June bug! “No, I swear on Steve Jobs ego that I did not buy another PowerBook. Another PowerBook, how silly would that be? Just the E Key replacement kit.”

Then I made myself scarce.

Later that evening I logged on to the Apple Store website and checked the progress of my new Core Duo MacBook Pro. (The PowerBook was discontinued.) Ah, I see it made the flight from Shanghai to Anchorage. I fired up iTunes and clicked on Beethoven’s piano concerto number 5 and sat back to wait. 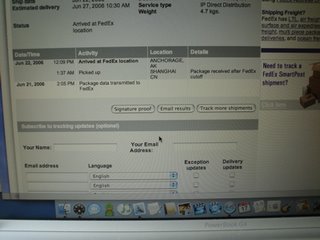