How many millions of you are going “Ewwwwwwww!”

Many millions I suspect. The Brussels Sprout is the most hated vegetable in the world according to children, although how many children have actually eaten one? Really. Such a reputation. Undeserved, I say.

The mighty Sprout is rich in vitamin A, vitamin C, folic acid and dietary fiber. Furthermore, the noble Sprout has a crisp, nutty flavor that goes well with butter and lemon. So, there!

A little known fact is that the number one chocolate confectionary sold in Switzerland is, you guessed it, chocolate dipped Brussels sprouts! They are not exported, by law I think.

Of course we all know that things that are good for you are neither good tasting nor popular, like spinach, cod liver oil, exercise and moderation. Who needs ‘em? But, the misunderstood Brussels sprout is that rare exception that is both good for you and good to eat. Moderation, bah! Bring on the sprouts!

Today I write in defense of the regal Sprout, a vegetable I, and, apparently the entire Swiss nation, happen to like. It wasn’t always so. As a child presented with a plateful of soggy Sprouts I would run and hide or join the French Foreign Legion; anything to escape the mushy, foul-smelling, sulphurous pile of green nightmare in front of me.

Yet, what I ate as a child and what most people are presented with are the results of abuse and torture of the poor, naked Sprout by…

Yes, friends, millions of defenseless Sprouts are subjected to freezing every day. Torn from the warm, sunny climes of the California sprout growing region Sprouts are bundled into unmarked 18-wheelers at night and trucked to an undisclosed location where they are frozen like a brass monkey in a Minnesota blizzard. And heinous as that might sound it gets worse. Once frozen the hapless Sprouts are then shipped to elementary school cafeterias around the United States where they are subjected to days of incessant boiling! Boiling! Until their delicate leaves are reduced to shriveled masses and the exhausted Sprouts expire releasing copious hydrogen sulfide, i.e. fart smell.

American students presented with a steaming green pile of sulphurous green corpses of dead sprouts are commanded to eat them or there will be no dessert! How can you have your dessert if you don’t eat your Sprouts?

Is it any wonder that education in America is going downhill?

To illustrate the plight of pitiful Sprouts I present the following series of photographs.

WARNING! The following photographs are of a GRAPHIC nature! Viewer discretion is advised! 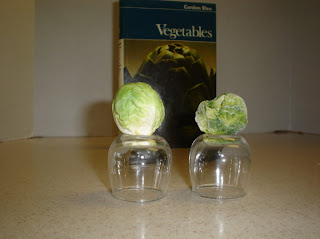 The Sprout on the left is a fresh, happy Sprout about to embark on a trip to Switzerland where he will be dipped in warm chocolate and placed on a shiny silver tray.

The Sprout on the right is a very unhappy, shivering frozen Sprout about to be dropped into BOILING WATER! 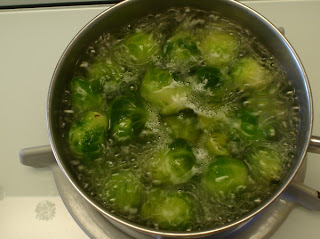 Bubble, bubble toil and trouble! Sprouts boil and waters bubble! Eye of newt, toe of dog, rather than a Sprout you’d eat a frog! 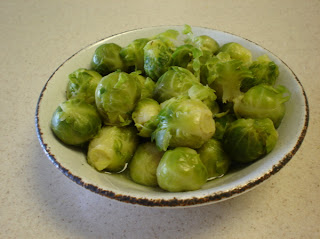 Sad, sad bowl of Sprouts destined for an elementary school in New Jersey where they really won’t notice the smell so much.

How long can we allow this to continue? Free the Sprouts, I say! Contribute generously to the Sprout Liberation Front at P.O. Box BR-549.
Posted by Bill at 2:07 AM

I LOVE brussel sprouts. Even as a child I enjoyed chomping my "baby cabbages". Of course, my parents raised brussel sprouts on their organic hobby farm, so I doubt if it gets much better than that!

I can't believe you were thinking about brussel sprouts at 2:00 a.m. No wonder you can't sleep. If you dip most anything in enough chocolate, it's going to taste good. Maybe I'll give fresh brussel sprouts a try.

Count me in as a sprout lover, too! I loved them even as a kid when my mom served them *gasp* out of the freezer...it was the whole "I'm eating baby cabbages" thing. Now, I like to buy the fresh ones and roast them in the baking pan along with a chicken and root veggies. Yum!

You couldn't think of any other topic besides BRUSSEL SPROUTS?!?!??!!! Are you insane!!??!? Brussel sprouts are the head honcho of the evil vegitables. EVIL VEGITABLE!!!

Here I am at the South Pole suddenly craving Brussel Sprouts. You are an evil evil man.

I love them cut in half and sautee in butter with a dash of lemon, salt & pepper, brown nicely on the flat side, steam a little in the lemon juice to soften through. Heavenly.

Hi, I live in Switzerland for all my life - I've never come across any chocolate brussel sprouts - pralines - maybe there is a ressemblance. your blog is fun!