I guess the names meant something to someone but to those of us on the front line of the business it was still “computer stuff.” We programmed computers, we loved them and hated them in the same day. We lovingly unpacked them, fed them clean power and dusted their little blinking displays, and, years later, hurled them into a dumpster without so much as a good-bye, more a good riddance.

Yes, we in Information Technology were tough taskmasters; always distracted by the next shiny object.

And we were a fickle bunch. I remember the lunchroom discussions when Hewlett-Packard decided to switch from light olive to pewter as a color for their computer enclosures.

We were deadly serious.

“I hope they cornered the market on that pewter Pantone color or they could find themselves shades different, SHADES DIFFERENT, in a few years,” I recall hearing a co-worker foam.

Shades different! Heavens to Betsy that could sink the stock price!

Good old Hewlett-Packard or HP as we in the know refer to it. HP is still hanging in there in spite of not cornering the pewter Pantone color market twenty years ago. HP developed one of the first and arguably the best handheld calculator back in 1972. They followed with a line of mini-computers that brought computing power into colleges and small businesses for a few thousand dollars at a time when mainframe computers cost millions.

And during my years of servitude in IT I programmed on those HP minicomputers in an era before the Internet, before cell phones…

It was way cool.

Now, here I am at home. Home. Not a business. Not a corporation. A place inhabited by cats. And I’ve got more computers than you can shake a stick at. Upstairs, downstairs, wireless network, wireless printers, scanners, stereo hook-ups. You name it and I’m running it. It’s a full time job just keeping the printers supplied with paper!

I’ve got drawers of spare print cartridges, drawers full of wires and old power supplies, connector cables, antennas, tools and all sorts of stuff. Need a framastat? No problem, I’ve got two!

Every day I go around the house doing IT maintenance; checking print levels and paper supplies, checking bandwidth, doing backup, cleaning up spam. I tell you, it’s a job.

And, so, it’s with some poignancy that my venerable home computer, faithfully running Windows 98 for nearly ten years, finally cratered, kicked the bit bucket, shrugged its mortal modem coil and displayed one last Black Screen of Death. It’s death rattle was a rakkity-rack, rakkity-rack of a crashed disc drive and, in the end, I pulled out the power cord and heard that final Doppler whine down of it’s fans and motors until there was only silence.

It was dead. Not kipping on its back, it was. This pavilion was dead. A goner. Deceased. Met its maker. Passed beyond. Departed.

Realizing that we were now One Computer Down in the house I switched into IT mode and determined immediately what had to be done.

“Hey, I’m going up to the mall. Do you need anything?” I offered innocently.

“It’s raining. Why are you going to the mall in the rain? You’re not going to buy a computer, are you?”

“OK, that sounds good. Just make sure you get a 20-inch power cord with 320 Gb of disc space and at least 2 Gb of memory. Oh, and don’t forget Apple Care. Hurry home!”

Stunned momentarily I let the commands sink in before running to the garage lest I wake up. That sounds like one of these: 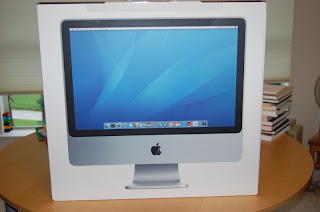 In a trice I was returned with the “power cord” and proceeded to set it up. Fortunately, Setup Assistant was there to help me through the process and soon we were synchronizing files, loading this and that and having a wonderful time.

About half way through the setup procedure, now that I was in full IT mode, I started thinking about the network. It’s old our network is. Very old. Ancient. 802.11.b sort of old. I’m surprised we can download any videos from Girls Gone Wild, I mean, CNN at that speed. We definitely need an upgrade. I might have to wait a week or so before going out for another “power cord” although if I’m careful I can hide the cost in our Tater Tots budget.

Hey, I didn’t spend all that time in IT and learn nothing!

While I’m at it we could use a laser printer and a big screen TV, and surround sound and, well, as Chief Information Officer of the house I’ll need a Corvette to drive around in. And a condo. Definitely need a condo for off-site planning meetings. And if I go over budget I can blame the kids! Perfect, just like the old days.

The Apple store guy just starts smiling when he sees you coming, doesn't he?

I'm sure I don't have to mention this, but be sure to run all the CAT5 cables under enormous floor tiles that can be removed for maintenance and name your servers after cartoon characters! Also, it would be a nice touch to have an armed guard at a gate in front of your Center that likes to chew tobacco and talk a lot!

As someone who still lives in the miserable corporate IT world... your blog made me smile. I got my C.S. degree before IBM made the PC. In college we started out with computer cards of all things! I'm now ancient and I've only been out of college 25 years!!! The tech revolution has been rapid and I can judge it by how out of date I've become while trying to stay employed as a non-programmer, because we don't write code (much anyway) in the US any more... it's all outsourced to another country.
Hug your new Apple for me. I love my HP Windows XP computer but I love my iPod more!