I'm going to experiement with aubergine.

Sounds good. I'm hungry enough to eat anything so long as it's not eggplant!

Scene 1: Dialog between Chef Bill and his down-and-out brother Budd.

Budd: You mean to tell me she cut through 88 aubergines before she got to O-Ren?

Bill: They all fell under her Hanzo santoku chef's knife. And, there weren't 88. They just called themselves the Crazy 88 Aubergines.

Bill: I dunno. They were just eggplants. Maybe they thought it sounded cool.

Budd: She got herself a Hanzo knife? I thought he swore a blood oath not to make another knife.

Bill: Apparently, he has broken it. She has the knife and she's coming here to turn you into a gumbo. You haven't by any chance kept up with your sauces and seasonings?

Budd: Naw, I gave that up a long time ago. My hollandaise is a separated mess and my bechamel is as runny as a four-year old's nose.

Bill: Budd, you have to realize she's coming here to defeat you and I have no doubt that she will win. She will be the Iron Chef.

Budd: I don't dodge guilt. I pay my dues. Bill, I'm a short order cook in a corporate cafeteria. If she wants to start a bake-off all she has to do is come down here and mix some batter and we'll be in a bake-off.

Budd: That woman deserves her revenge. And, and we deserve to lose. Don't we? Ha, then again, so does she!

Pour enough chopped tomatoes in a casserole dish to cover the bottom. Brown the eggplant slices. I use Olive Oil Pam spray and a high heat. Place the slices in the casserole. Saute sliced onion and pour on top of eggplant. Cover with remaining chopped tomatoes. Season with black pepper, salt and garlic powder. Slice the cheese into quarter inch discs and arrange on top. Cover in foil and bake for 45 min to an hour at 350.

Remove from oven, whisk cream and eggs together, pour mixture over casserole, return to oven uncovered for 30 minutes. 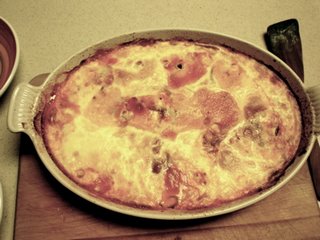 A word about food photography. Without the proper lighting and using a point-and-shoot digital camera like mine your food will come out looking flat and yellow.

Cooked to a golden perfection is what I would have liked this picture to convey. There is hope. Check out Benjamin Christie's site on food photography.
Posted by Bill at 8:46 PM