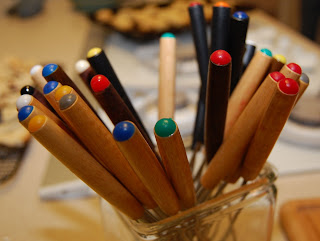 Now I remember why I have a fondue party once a year. It's exhausting!

Although the preparations started early in the day, the actual party didn't start until 7 pm and ran until 3:30 am the following day. That's eight hours of fonduing. We got through a lot of food, libations and had a great time.

With the house tidied up, Christmas decorations in place and the dining room laden with food and drink, the party quickly moved into the kitchen where it remained throughout the evening. That's the way it usually goes. The kitchen is the heart of our house and what better place for our friends to gather. 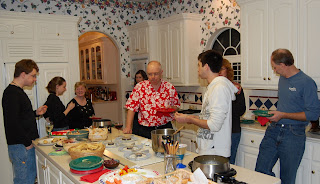 As a special diversion I brought down my venerable 21-year old Macintosh Plus, fired it up, and we played the old games that are still a lot of fun: Brickles, Shuffle Puck, Cairo Duck Hunt and my favorite, Daleks. Despite its age the old Mac held its own against players of Brickles defeating all opponents with it's little 1 MHz processor that is over 2000 times slower than today's machines. Lots of fun was had by all. 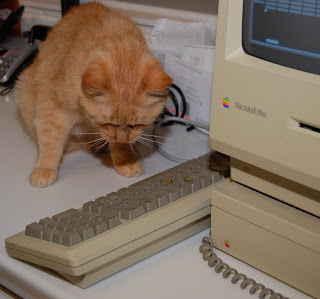 Later in the evening we set up a local area gaming network and engaged in a Battlefield 2142 tournament. While T-Mart and Colester battled to the bitter end, Kink was nonplussed walking through No Man's Land between the warring factions. 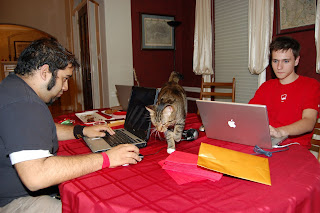 Josh provided entertainment on the base guitar while T-Mart streamed what I think was music over the wireless network to the stereo. All this to the constant background sound of cell phone ringtones made for an interesting, if noisy, evening. 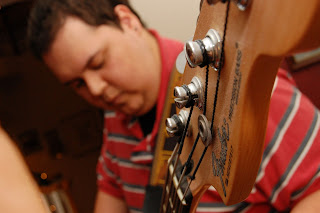 Time flies when you're having fun but all good things come to an end, and such it was with Twelve Two Two Fondue IV. Kink slinked off to find a warm place to sleep, Sandy the Cat was already asleep on the couch, a cold front had blown in bringing a chill to the air and the last of the guests bid their fond farewells and made their way home. I surveyed the wreckage with satisfaction: bottles, plates, glasses, trays of crumbs, bits and pieces. It was all good.

It was the best fondue party ever, but we said that last year, too. That means that next years party will be even better than the Best Ever. 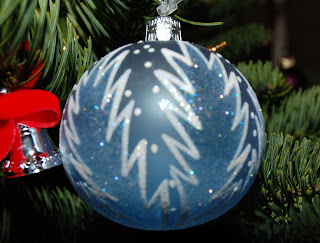 So it's not just about dipping pieces of meat in melted cheese? There are video games and computer geeking at play? Cool.

Is that a couple bits of cat throw-up on the Mac keyboard?