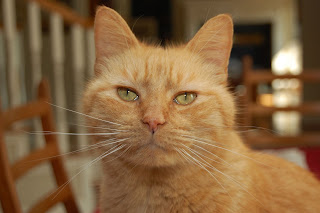 What's that in dog years?

I'm pretty sure the only way I'd ever be able to tell if a cat was deaf is when it no longer reflexively twitched an ear in my direction when I made a noise. Because you they sure don't show any other sign of hearing when I speak to them.

He is a very handsome fur ball!

ORANGE cats! My favorite. I saw my orange cat trotting through the house carrying the bathtub plug on a chain. (the OLD type of plug) That was 20 years ago and I never did find that plug. EVER.

AND, YES, I'VE CLEANED THE HOUSE SINCE THEN.

Jacked around by cats? Nah. Impossible. (Although you kitties out there might want to read The World Is Your Litter Box just in case it is possible.)

I just stumbled upon your blog and think it is an excellent read for foodies and especially like the photos and design of the blog.I started off as a blogger myself and realise the importance of a good clean design like you have here. I have now bookmarked it for myself to read and have added you to our new list of "all the food blogs in the world" on www.ifoods.tv which we have been compiling for the last month! Hopefully it will send you some traffic in the long run. Looking forward to reading your thoughts on food so keep up the good work and talk soon. Cheers