I was out of milk, out of ice and out of clean clothes. I figured I could do some washing in the sink and rig up a line across the patio. In the humidity the clothes would dry, eventually, like in October. Or, I might start a Wet Look trend.

At noon I took time off for lunch and decided to drive home to check on Kink and Sandy and maybe, just maybe, the power would be on. Turns out I was right.

As I drove through the neighborhood the first thing I noticed was that the traffic lights were working. No more temporary Stop Signs in the middle of the intersections. The second thing I noticed were porch lights. Some were on. As I got closer to home there were still some lights on giving me encouragement that at long last we had power.

Arriving home when I opened the back door I was blasted by cool air. The AC was running. Kink ran up to me and jabbered on about beeping noises, cool air and lights. After calming Kink I went through the house and got things in order. According to the oven clock we had been powered up for over two hours.

Returning to work I told Kink to hang tight and I’d pick up a feast on the way home from work.

Unfortunately, I forgot about the snare I set for Barky Dog, but that’s another story. 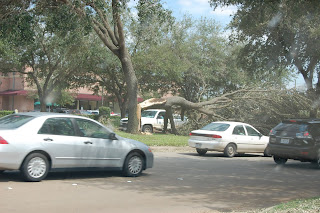