My People, My Tribe 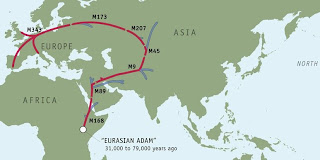 I am participating in a Global Genetics Project sponsored by National Geographic. For a small fee I was sent a kit and instructions on how to harvest cheek cells (yes, in my mouth!) and send them off for National Geographic to figure out my heritage.

That's the back-of-the-envelope description of a vastly more complicated scientific process. However, my part was easy and I sent my cells for analysis a few weeks ago.

The results are in.

Of course, my wife already knew that and I could have saved some money if I had only listened. But, I learned more about my people's journey across the globe and through time, and the project is continuing, so, who knows what details will be discovered in the future.

My "haplogroup" is Rb1, which is quite common and representing most Europeans. The farthest back I can trace my family is Ireland in the 1700's.

The NG project is not that refined. They're tracking vast groups of people.

Here's what is known so far.

About 80,000 thousand years ago the clan of my earliest known ancestor migrated north and east out of Africa and into the Middle East. They then moved north into Russia and then swung around west into Northern Europe. Following the edge of the ice sheets they were forced south into Germany, England, Italy and Spain.

In the diagram above for my group, the "M" numbers refer to "markers" which are significant mutations present in my very own Y chromosome. Not everybody has my mutations.

Only My People, My Tribe.

The trail so far ends about 35,000 years ago in southern Spain where my people dwelt in caves, learned to weave and to carve and to paint. They raised and protected their kids just like we do.

Someone survived attacks by animals, disease, war, starvation and a myriad of things that make you dead. Some lucky bastards ducked and weaved their way over 80,000 years to get to me.

Have you read Jean Auel's books
Clan of the Cave "Bear". or any of ther Earth sChildren books.

Cro Magnon was discovered years ago and was obviously an early European, origin unknown.

Now, genetic studies have traced the origin of Cro Magnon, but he is still the father of us all.

So, now the migration paths are being traced which adds science (genetics) to the fiction (Clan of the Cave Bears).

Jean Auel spent many years researching and writing her wonderful books. Too bad, being a writer yourself, that you cannot appreciate the fiction and the science equally.