My friend Genevieve works down under.

No, Genevieve works in Antarctica. It's a tough word to spell much less imagine being there.

Weird stuff in the ocean.

Did I mention ice and cold?

Here in Houston it got down to 40 degrees Fahrenheit (see, all you Celsius bigots, I used the "F" word)

In Antarctica it gets to a bazillion degrees below zero. On any scale. Doesn't matter. It's that cold.

Here's what Genevieve wrote about ice on her blog Ice Wishes and Snow Dreams:

Even the striations and bumps and streaks of the snow & ice, blown forever in one direction, were beautifully shaped and heartwrenchingly perfect. Nothing was in error and everything was random & impermanent. Some areas were like wood grain, others like cameo images of canals & lakes & deltas, some were like the gentle folds of a pure white quilt on the foot of your fresh made bed after you just climbed into it. There was so much texture I wanted to go out and crawl around on my hands & knees photographing it closely and in detail, forever. It was like the stone beaches in Maine & NZ that make my heart sing for the infinite variation of it. I could get lost wandering out there watching the snow, rarely noticing the view, and not in order to be careful where to set my feet; but in utter fascination at the shapes & colours & shadows of it.

Genevieve is a gifted writer who is in love with the most inhospitable place on Earth. Her descriptions of the snow, ice and majesty of Antarctica are inspiring.

And I think what I find most interesting is that Genevieve works in Antarctica. She's not a scientist studying some arcane crab, rather she's support staff. She makes the community go. She's infrastructure.

She drives her trucks and fuels her airplanes in Antarctica. Pardon the pun, but how cool is that?

This season Genevieve is at the South Pole Station. Literally the bottom of the World or, when the poles flip, the top of the World!

Genevieve sent me a patch because she knows I like patches. I sent her a scarf because at the South Pole can you have too many scarves?

Check out Genevieve's blog and if you feel so inclined send her something from warmer climes. It's surprisingly easy and her mailing address is on her blog.

I don't know about you, but sending stuff to the South Pole is Very Cool! 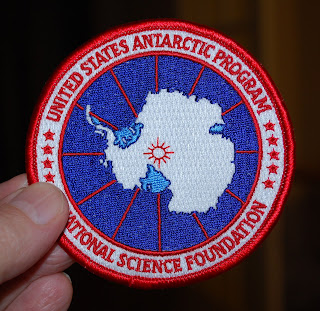 Now THAT is a cool patch.

But what about the Kelvin scale?

You just made a girl cry in a place where tears freeze to eyelashes and burn my cheeks. I am incredibly touched by your compliments and admiration of my writing, not to mention the friendship we have developed.

I wore the scarf last night, wrapped multiple times around and covering my face under my goggles. It is easier to breath through cashmere, I find. It was a luxury I am rarely allowed outside here.

Thank you so much, for your so often unexpected and unearned gifts, of books, of chocolate, of support and friendship.