Julia Louis-Dreyfus's Elaine on Seinfeld once offered a non sequitur at a party just to relieve her own boredom: "The dingo ate your baby," she blurted in a bad Australian accent.

Imagine my shock, then, when after I tried to shake some paprika out of my favorite supply nothing came out.

I opened up the tin and, lo and behold, it was full of “weevils!” Not just a weevil here or there, but Full Of Weevils, as in gigantic, solid, crawling mass o’ weevil. WeevFest. Smackdown WeevilMania!

I was thoroughly disgustipated, not to mention out of paprika. The container was more weevil than paprika! Not to be outdone, I had a backup, but, guess what? It was weevilized, too.

Not only that, but my cache of cayenne pepper was totally weevilized. These things eat cayenne pepper? I couldn’t believe it, but there it was. Weevils on pepper.

My immediate response, after discarding the spices, was to get on Google and find out what these things were that could and would eat paprika and cayenne pepper.

Whatever. My paprika was gone and I needed a new supply.

“I’ll pick up some paprika at Kroger’s the next time I go out,” the Voice said.

“No, that won’t work,” I replied, “they only sell sweet paprika. We need the hot.”

“The hot type is hot which is why I keep both. Sometimes I need hot, sometimes not.” I was pleased with my little rhyme.

“Well then you deal with it. I forfeit my responsibility for acquiring the paprika.”

“Forfeit your responsibility for acquiring paprika? Give me a break,” I thought very, very silently.

“OK, Light of my Life, I’ll handle it,” I said out loud cheerfully. And I headed out to World Market, the supplier of hot paprika.

I arrived at World Market and the place was dead. Post-Christmas slump. I picked up a few specials on my way to the spice aisle. Picture frame. Carved monkey. Shirt from Indonesia that was a print of either a crocodile or a dancing girl with a terrible overbite.

Finally, I reached the spice aisle and snagged the very last Hot Paprika tin they had. I checked the contents for weevils, being a little gun shy at this point. I also picked up some sweet paprika since it was in ready supply.

At long last, after a day battling the Drugstore Beetle/Weevil I returned home with paprikas galore and ready to cook.

“What are you doing for dinner tonight,” said the Voice?

“I bought some stuff to do my Mexican Pork Stew,” I said.

“Does that call for paprika?”

I thought long and hard about that answer. “Not usually,” pause, pause, pause, “but I think it would benefit from paprika. Yes, most definitely, it would.”

Yes, paprika for all. I’m sure the weevils would approve. 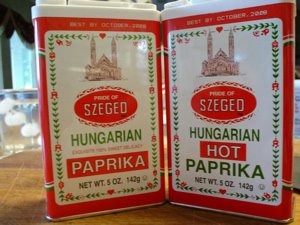 I once had a problem with these little pests. They were in more than just my spice cabinet. Be sure to check around all your flour, pasta, rice, oatmeal, bread & breadcrumbs, and every spice jar in the cabinet. They can be persistent little buggers.

well, it's pretty obvious that World Market put the paprika in the back, so that you would be baited into buying carved monkeys and weird shirts on the way back there. yes, indeed. and you fell for that trick? will you ever learn? just what are you going to do with the carved monkey? use it to scare off the weevils in the cupboards?

I'm impressed you could even THINK of cooking after seeing WeevilSmackdown 2006. I have the heebie-jeebies just THINKING about it. Wouldn't cook for a week.

Weevils wobble, but they don't fall down. Thank goodness, because who would want to pick them up?

That hideous, pulsating image would be burned into my brain for a very long time...

OK, one question: How long have you been sharing your paprika with the weevils? Because, y'know, weevil-flavoured paprika, hot or not, is to shudder.

We don't have insects in Antarctica, and when we do, we treasure them and hide them from the bosses and keep them as pets.

Looking forward to WrestleMania 22 are we? :P

what do weevils look like? how did they get there in the first place? do they materialize out of no where and just vanish? is there a momma weevil lurking around your house? how do you kill the suckers? i'm weevil stupified!

Nice to know that someone else uses "disgustipated!"

Ummm, Yuck! Thanks, now I have to go and check mine out just as a safe measure...