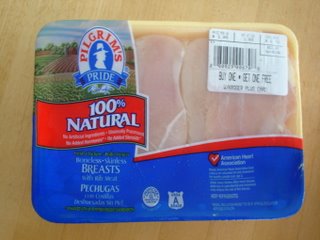 See the picture? What's it say? Pilgrim's Pride! Yeah! Two for one, too.

So, you're bottom line's going down, Tyson.

Pilgrim's Pride chicken, raised by Pilgrim's the founders of our great country. Lovely, well-groomed birds and well-mannered, too. Why, I'd be proud if my daughter came home with a Pilgrim's Pride chicken boyfriend, they're that good. Pilgrim's Pride, nice birds, courteous drivers; they'd never think to run you off the road. Nope, they just want you to have a special dining experience and so good for you, too. Not only are Pilgrim's Pride birds lean and nutritious, but their drivers won't raise your blood pressure by trying to squeeze you into a crash barrier.

Pilgrim's Pride. A considerate chicken.
Posted by Bill at 5:05 PM

That is one way to put your money where your mouth is (and your heart back where it belongs after that ordeal!)

Sorry, it has to be a fake. Pilgirms would never sell breasts.