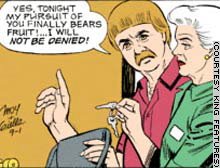 I read Mary Worth.

There, I said it. Surprisingly, I don't feel all that liberated, after all, Mary Worth is just a comic strip. But, you have to ask yourself, why would anyone read Mary Worth?

Mary Worth is a soap opera comic; an endless saga of personal minutiae appealing to nobody, really. “Mary bakes a casserole” is an exciting story line. “Mary considers stripes or polka dots” is more typical. (Finally, after 6 weeks of daily panels Mary selects “stripes”)

To say that Mary Worth is “slow moving” is to insult the very concept of slow-moving. Snails should be insulted; they are sprinters by comparison. Sloths should be insulted; zipping along the jungle canopy. Plate tectonics should be insulted; the Himalayas rose before that casserole got out of the oven. Why, I’ve seen days go by with Mary trying to raise an eyebrow. Monday it’s eye level. Tuesday there’s a bit of an arch, but it could be a hair on the newspaper. Wednesday, definitely it’s moving up. Thursday it looks more like a C and less like a parenthesis.

The thought percolating in your mind right now should be, “Are you insane?”

Call me crazy. Call me an optimist. But, I keep checking up on Mary hoping that I don’t miss that magical moment when she moves ahead a hundred million years into our time! Sock it to me, Mary!

Alas, not the case.

Mary Cooks a Casserole took something like 3 years to produce. Mary does Dallas just isn’t gonna happen. What’s an optimist to do? It doesn’t look good.

Totally oblivious to the obvious, Kelrast is an anagram of “stalker.” (I read that today on CNN. Duh)

Yes, Aldo has Mary Worth in his sights and is stalking her! What? A stalker in “Mary Worth” where each stalking step could take a year of daily panels?

But, no, the stalker episode moved at light speed. Light speed, indeed. Within a few weeks, yes, a few weeks, Aldo had gone from chance introduction to pest to stalker to…

What? Dead? Death in “Mary Worth?” Yes, and in less time than the heat death of the Universe. Shock! Horror!

Spurned by Mary and confronted by her weird friends Aldo took his friend Johnny Walker for a ride and plunged over a cliff onto the rocks below, thus ending the story line a good ten thousand years before it should have naturally.

I’m still in shock. If death can happen in “Mary Worth” so quickly, what does that portend for the rest of us? It’s a serious consideration. Death in “Mary Worth” changes the rules. Oh, the humanity.

But, more importantly, what about the casserole that’s still in the oven? Will it be overcooked? Will Dr. Jeff return from Tahiti having quite possibly encountered bronzed, nubile young women to confront Mary who has seen better days, like, 300 years ago?

A rapid story line followed by a death in “Mary Worth” is a serious disturbance in the Comic Force whose repercussions have yet to be felt.

Don’t fret, though. I and many others who sacrifice their intelligence daily reading “Mary Worth” will remain on the front line, ever vigilant.

You're one of the Comics Curmudgeon Cardinals, right?

Is it me, or does the fellow in the comic frame above look ominously like Captain Kangaroo?? Hm. The plot thickens.

(P.S. I've been lurking on your site for quite some time now. I like it.)

wow, deep analysis of a pointless comic :)
~The Scuba Skipper

i used to read mary worth at my grandmother's house. the last one i remember was about how she had to buckle her seatbelt before her plane took off. but at least it's easier to follow than prince valiant.