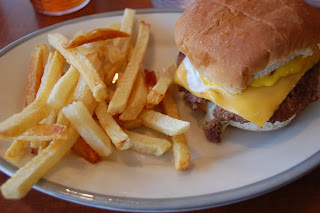 George has been working this joint for 47 years and by now he knows the ropes. All of them.

The ropes include "plate" lunches, served on a real plate and set on the menu from Monday through Friday.

Monday is meatloaf with mashed potatoes and green beans.

Tuesday is spaghetti with garlic bread and a green salad.

Wednesday is fried chicken with cut corn and apple pie.

Thursday is roast beef with gravy, baked potato and salad.

Friday is pork chops with apple sauce and cole slaw.

I chose a cheeseburger with the works: lettuce, tomato, pickle and onion. With a side of fries. Fresh, not frozen. And iced tea, shaken not stirred.

George busied himself around the kitchen making sure everything was being served to his standard, and he worked the cash register.

After our lunch the waitress asked us if we had saved room for dessert. By a strange stroke of fate we had, and ice box pie was made to order to fill that room. 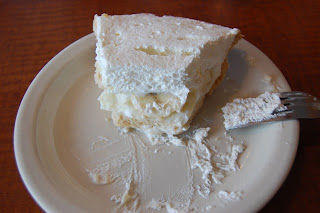 Ice box pie. Made in George's kitchen daily. Never a slice remaining at the end of the day, according to George. An ice box pie consists of a flakey crust filled with a pudding or fruit filling and topped with meringue. So good. I was half-way into it before I remembered to take a picture!

And, here's George, the owner, cook and chief bottle washer.

George said, "Haven't I seen you before? You've been here before."

"It's been a while, George, like 43 years. I was probably a bit skinnier."

"Yeah," George said, "I remember. Your hair wasn't so grey."

And he was absolutely right. 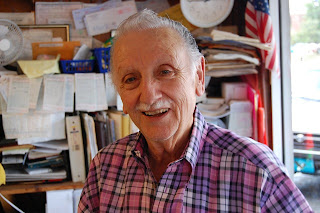 Ahhh...
Makes me hungry for King's X - Toc's Coffee House. They had the best burgers, full of flavor and of course grease... fresh cut fries with some of the peel still on 'em and you can't forget the home made apple pies! I just can't get that kind of late-night food here in Germany!

Why does it have to be all the way in Shreveport!!! DARN. Of course we have Kincaids in Fort Worth... marginally closer to Plano. None here though... it's all chain, chain, chain and more chain food places. JZ

Great post Bill, I wish George's was around the corner from me, real American food with a friendly face behind the counter. We need more of 'em.

Around here, we have the Railside Cafe. Same deal, I always schedule me work week to be close by on Friday. Friday is chicken and dumplings day. That's good food.

I'm crying I miss hamburgers so much...... Thanks for reminding me... it's good not to forget.