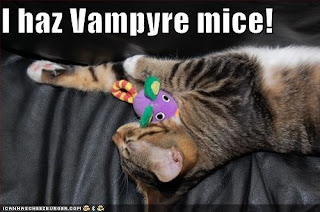 Kink the Kat turns One Year Old on his official birthday today. Based on fang size the vet estimated Kink's birthday to be sometime in early October so we picked the 1st as the grand day.

Happy Birthday, Kink, and many more. On channel 4.

Kink, aka the Kinkster, aka Kink-O, aka Kinkers, aka Kinkilito, aka Kinky Dinky has taken the celebrations in stride by sleeping all day. No doubt, there is an all-night party planned and I'm not invited, thank you very much, Kink. Really.

At the grand old age of 1 Kink has outgrown the Slashing and Gnashing Phase which means I'll no longer have to explain the Little Mermaid band-aids.

Kink's favorite sport is Knocking Things off of Other Things and I think he's going pro. However, if you like clean surfaces in your house then Kink's your guy. He can clear a table in a few minutes using a variety of techniques.

There's the Casual Bat, a slight nudging of the object until it falls off the edge.

There's the Two-Pawed Swipe that not only sends objects to the floor but at a great distance.

There's the Full-Frontal Slide that involves a high-speed skid for maximum disruption (especially effective with newspapers).

And there's the Pick-n-Toss that is a double action lift and throw, almost a ballet.

We're happy that the Kinkster brings some excitement to the house and we're looking forward to his second year during which he discovers, hopefully, that's it's not cool to party at 3am.
Posted by Bill at 5:16 PM

Happy Birthday, Kink. I'm sure glad that you're partying at Bill's place at 3 AM rather than at mine...
I'd say that Kink definitely deserves another round of milk on this momentous occasion!

Happy B-day Kink! My owner, Miss Kitty, aka Bee-Gee-cat, says meower or something like that. She is about 2. The vet said last year about this time that she was 1 by the tooth method also. She was a real alley cat that adopted our storage shed (under it) as home... so I started feeding her and trying to make friends. I hadn't had a cat since the early 80s since I was diagnosed allergic. But something made me adopt her... and my husband now loves a cat, even though he said he hated all cats... his idea to bring her inside though. All old retired journalists must be softies inside. We computer geeks are pretty must softies too. So I've got the 17.5 year old retired Jack Russell terrier in his bathroom condo off the master bedroom... maid service and food supply included. And Bee-Gee-cat gets the rest of the house! Not much for the computer geek and retired journalist to use for their quarters... but hey that's life when you're owned by a dog and cat.
JZ in Plano