About a million years ago I built a crystal radio. The parts were right out of the Flintstones: plywood, copper wire, cardboard tube, a semiconductor diode and a capacitor tuner which was the most 'elaborate' part of the setup. Once assembled I could pick up lots of static and faint AM radio stations. No batteries required.

Little did I know at the time but part of the static I heard was radiation remnant of the Big Bang itself. It would have been way cool to know that, but at the time it was just annoying. Now when I hear static I think it's way cool and I am One with the Universe.

Some years later I built a Heathkit Short Wave radio that operated on many bands in the short, medium and long waves. I scanned the airwaves for hours at a time listening to Morse code, foreign languages and static, none of which I understood in the faintest. I did wonder, however, how true those stories were of people who "learned to speak English" by listening to radio. I listened to a lot of Spanish and never learned anything other than "pendejo" is a term of affection.

The Heathkit Short Wave radio was a serious contraption, and considering I had no freaking idea what I was doing putting that thing together it's a wonder it worked at all. Granted, I could follow the instructions but I can only imagine how many cold solder joints I made or how many components I put in the wrong place. I remember having a bunch of parts left over which either were spares or I didn't install them. Who knows? The radio worked in spite of myself.

Fast forward a few years or decades (and this was a few years or decades before the present) and a friend of mine showed me the latest and greatest in portable short wave, all band radios. The Sony ICF-2001 was about the size of a modern laptop (which hadn't been invented yet) and was (gasp, be still my heart!) DIGITAL!

Yes, you could "punch in" a frequency and pull up a radio station exactly. No "twiddling" of dials or knobs. No messing around with side bands and all that other stuff that brought in more Big Bang static than Big Bopper music. Just tap-tap-tap and it was Pendejo City! I was so impressed I bought the company. Well, not exactly. I made a mental note to find one of those Bad Boy short wave radios and that's what I did.

That was the plan. What I didn't count on was Sony taking the technology both up and down a notch; more powerful and smaller. Enamored, never the less, I sprung the cash and scored the goods; the Sony ICF-2002. Running on four AA batteries the 2002 took me to Pendejo City any time I liked and also brought in AM and FM stations free of the Big Bang. I had a lot of fun with that radio and learned to swear in 39 languages.

All things come to an end, however, and for the ICF-2002 it was a bad set of batteries which leaked (twice) and corroded the circuit boards rendering the radio mostly useless. I say "mostly" because in its final days in 2008 it served as our only link to the Outside World in the aftermath of Hurricane Ike which knocked out power to our house for over six days. With the radio we could pick up AM, FM and TV audio broadcasts that told us how quickly, or not, the service companies were working to restore power to the area, the priorities and the predictions.

Much like my days centuries earlier with my crystal radio set, we huddled around the little Sony and dreamed of chocolate bars dropping from airplanes as the power siege lifted. I like Ike! Not.

So, after power was restored and we went about getting our lives back in order I spent a little time learning what Sony had done in the intervening years. Turns out not much and a whole lot. The ICF-7600 is a much-updated version of its ancestor and totally computer controlled. It didn't take me long reading phrases I had no idea of the meaning but sounded totally cool like "synchronous detector circuits" before my Shiny Object Gland took over and I was hammering Amazon like a starving monkey on a coconut.

In due time I retired the ICF-2002, conducted an autopsy to determine how far the battery damage actually went (extensive) and the new radio moved into the hood. Similar operation, similar size but this guy will live on a diet of lithium batteries, hopefully less prone to leaking and causing damage. 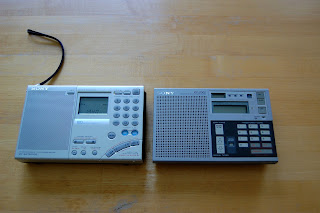 Radios that run on batteries, what a concept. My husband actually has an AM/FM one that he listens to at night when he can't sleep. I've always wanted a short band radio having been transfixed by all those foreign languages, morse code etc. once upon a time long ago. Now at least I know what to look for... Thanks Bill!

Best line of 2009 ". . . my Shiny Object Gland took over and I was hammering Amazon like a starving monkey on a coconut."


Thanks got the giggle Bill.