I thought it would be fun to post our annual Christmas letter from 1999. Party like 1999, Garth! Also, we had a recent "Nobbs Sighting." Yes, the old boy is still kicking around the neighborhood. 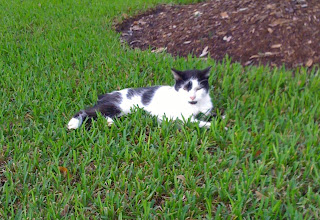 It makes you wonder if something is wrong when the cat chooses to live on the streets rather than stay at home. Granted, the Farrell’s moved in June but only about a mile from the old place, certainly not justification for Nobbs the Cat abandoning pretty nice digs with a swimming pool and an endless supply of Cat Chow for a life of sleeping in doorways, eating out of trash bags and picking up aluminum cans for spare change. He hitches a ride home every so often for some fresh shrimp to eat and clean clothes to sleep on, then he saunters back to the mean streets of Sugar Land where he is king. Well, so long as he’s happy.

In fact, his is not unlike the kid’s lifestyle. They use home as a place to eat, sleep, make phone calls and catch a lift to the next of their never-ending activities. If the van could talk it would describe its year as a continuous, frenetic journey between soccer games and tournaments and referee clinics, basketball games, driving lessons, Boy Scout meetings, campouts and adventures, orchestra and band concerts, birthday parties, and emergency shopping trips to purchase school supplies on Sunday nights at 9 PM. Oh, yeah, and picking up Nobbs every week or so for a hot meal and a delousing. Life in the 90’s.

All journeys have their highlights and this year has been no exception. It got off to an exciting start with soccer goalie Helen breaking her wrist trying to defend against a hard kick. The score: wrist 0, soccer ball 1. Today, Helen’s wrist is as good as new, in fact, even better. Helen knew that when Nobbs broke his toe last year it had to be amputated, so, all in all, she’s feeling pretty good about how her wrist turned out. She now has the uncanny ability to predict changes in the weather, a handy skill to have here in south Texas, and she manages to get out of activities that require heavy lifting because of her “poorly wrist”, don’t you see. Nobbs can still climb trees to murder birds, so everybody’s happy.

Still in January, Bill ran his first marathon, yes, folks, that’s 26 point two miles, and to this day he’s more than a little irritated at whoever tacked on that two-tenths of a mile at the end because after passing the big 26 mile marker the finish line is way the heck down the street. It just doesn’t seem fair. On the bright side he gets to do it again in a few weeks. It’s hard to believe it’s been a year since he was limping around the house on sore feet whimpering “Oh!”, “Ah!” and avoiding stairs. Houston Marathon, January 16th, 2000. He’ll be there.

Spring was a blur of soccer games and referee clinics. Helen, Sarah and Claire qualified as soccer referees and actually got paid for strutting around in nifty, black uniforms, waving flags, blowing whistles and generally looking officious. Claire also played on a team, as did Chris who complained about bad calls made by whistle-blowing, officious-looking referees. Soccer generally involved being three places at once with two vehicles, and occasional trips to San Antonio which introduced Claire to the art of map reading at night and caused Helen to “lose it” only a few times. Soccer was interrupted, briefly, for a skiing trip to Colorado to visit the Day’s in their splendid mountain home. Everybody returned intact and well-fed.

In June the Farrell’s moved to a spacious new house gaining a swimming pool, two extra rooms, an enormous kitchen, and losing, to some extent, one ungrateful cat. Summer was punctuated by a few short trips with people going in all directions: Sarah to Bartlesville, Chris and Bill to Scout camp, Claire to Las Vegas (doesn’t it just figure) leaving Helen with a magical week of being “home alone”. We won’t count Helen’s sojourns to Rio de Janeiro on “business”. The whole clan descended upon Phoenix for a few days in July to visit the senior Farrell’s who celebrated their 50th wedding anniversary in December followed shortly thereafter by Farrell Senior’s 80th birthday. A fine way to end the century by any account.

Life became less hectic as Sarah earned her driving license in September and was able to perform chauffeuring duties when Bill and Helen were stuck in traffic on the way home from work. She serves as a taxi for Nobbs, Chris and Claire. Nobbs seems the most grateful.

And, that, as they say, is that for 1999; end of the year and, as far as we’re concerned, end of the century. Claire (who else?) is in charge of the New Year’s Eve party. We’ll have champagne, set all the clocks in the house to go off at midnight, pick up Nobbs and feed him shrimp until he barfs on the carpet. It’ll be great! See you next century!

Postscript
Born this day in Billings, Montana, to William and Maddie Farrell, young William Farrell (b1919-d2005), Architect, Army veteran, friend to many and my father. He would have been 90 today.
Posted by Bill at 11:24 PM

I'm glad I met this blog on the Internet. Congratulations on the interesting posts. Wish you a wonderful evening! smiles