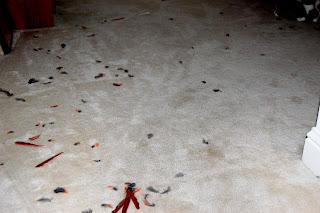 Wow. Kink is a mighty hunter! I've tried to catch lizards before, but their damn tails just pop right off and they get away. Anyway, I’d like to tell you that I’ve written a scathingly funny book, The World Is Your Litter Box, which will be out May 6th. The book is cleverly disguised as a cute cat book so humans will buy it, but is, in fact, a how-to manual FOR cats. Check it out on my website, www.theworldisyourlitterbox.com.

I think my skin will be crawling for the next hour after reading that post.

Had one of my labs pulled that stunt, you would have heard my screams all the way to Texas.

Oh yikes, Bill. I'm suddenly very, very glad that our two kitties don't have a cat flap and only sit on the window sills chittering at the birds.

Jeez, I thought these sorts of things only occurred in my household...glad I'm not alone.

I still can't get over the fact that your kitty is named Kink, because it reminds me of a friend's cat named Kinky.

This friend is gender queer, polyamorous, and into S&M.

So I guess you can imagine what I think of when I see the name "Kink."

Found you through Dooce - bought the book btw.