Pardon Me While I Smoke 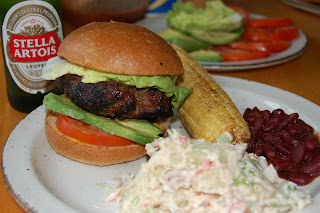 The Fourth of July.

The Fourth of July. Summer is here. It’s hot, but not too hot to eat outside. It’s exciting with anticipation. Waiting for the hot dogs to cook, waiting for the hand-cranked ice cream to freeze, waiting for nightfall and the fireworks display.

There are bands and celebrations of all kinds. Fun runs, and I must say, running on the Fourth of July in Houston is fun, fun, FUN! (Not.)

Nothing typifies Americana more than the Fourth of July.

Here at Chez Fondue we are planning to go with the flow and produce an All-American feast of delights.

We started this morning with a Red, White and Blue breakfast: blueberry pancakes and bacon. The salty, red bacon complimented the savory-sweet blueberry pancakes perfectly, accompanied by Starbucks Somalia dark brew. Kink the cat nosed ever closer to my bacon only to snag a piece of pancake. Clever boy!

On the menu tonight we are having:

Corn is a very forgiving vegetable. You can cook it to extinction and it’s still good. You can do grilled corn-on-the-cob a variety of ways.

Typically, I strip the husk from the ear of corn, remove the silk and wash it. Then I wrap the ear in a piece of aluminum foil. I place the wrapped ear on the bar-b-que as I’m bring it up to temperature.

It doesn’t matter if you have a gas grill, charcoal or no grill at all. Just place the ears on the fire and let them cook for 30-45 minutes. You can even do this in a 350-degree oven. Turn the ears once about half-way through cooking. I threw some wood chips on the grill to give the burgers that outdoors taste.

Unwrapping the corn, some of the kernels will be a toasty brown and very nutty in flavor.

In fact, you don’t even need to wrap the ears in foil. With fresh corn, carefully peal back the husk, remove the silk, restore the husk and drop on the fire. The water in the husk will steam the corn and protect it from burning. A little browning to the corn adds to the flavor.

Cowboy Beans are very easy to make. Simply add a few tablespoons of your favorite bar-b-que sauce to a can of beans and heat. Magic!

I think the key to a good hamburger is to cook it well, but not too well. Hamburger is tricky because you don't know where it's been unless you make your own. So, you have to get the internal temperature to at least 160 to cook out any bacteria that may be lurking inside.

With a gas grill you have some flexibility in cooking hamburgers. You can use a high heat to sear the outside, then use a lower heat to cook the interior while adding things like BBQ sauce or smoke. For today's menu I used smoke from mesquite wood smoldering on the back grate. I got the wood chips going early so I'd have a lot of smoke by the time I put the burgers on the grill.

I didn't do anything "funny" with the hamburger patties. I just mashed them into shape and sprinkled a little salt and pepper on both sides. Really, you don't need more than that.

When it comes to potato salad I'm all over the map, in that I like most kinds of potato salad. That is not the case for the rest of my family, so over the years I've adapted a rough recipe that seems to please everybody. It's a variation on warm German potato salad.

I use white, waxy potatoes because they hold up best after being boiled. I use bacon, some herbs, celery, egg and that's about it. I cook the potatoes until you can pierce them easily with a knife and cool them rapidly in an ice bath to prevent further cooking. I think this is key to ending up with a chunky, rather than a mushy, potato salad.

Once the potatoes are cooled, chopped and in the bowl, then Fun Time begins! What to do next depends on what you have in stock. Red bell pepper? Sounds great! Celery? Definitely! Chives or green onions? Bring it on!

I toss in the kinds of things I think my family will eat in a potato salad, mix the concoction and let it sit for an hour or so.

The finishing of a potato salad is the dressing and I've tried all sorts. My favorites are mayonnaise and either sour cream or plain yogurt. For this potato salad I used a Greek yogurt which turned out to be thicker than the Danon brand I normally use, but was very flavorful.

It's hard to quantify what I actually do with mayo and yogurt or sour cream. I just add a bit of this and that until the mixture looks moist and creamy. Then I let it sit for an hour or so for the flavors to mingle.

This potato salad can be served slightly warm, if the potatoes aren't totally cooled, or cold or in between. You can also serve it with a Ridiculous Stupid Omelette the day after.

Potato salad, it's what you want it to be.

Nice Salad
I made this nice salad which we didn't have an appetite to eat! It was grape tomatoes, arugula, mache and goat cheese. Looked nice, but we were stuffed! 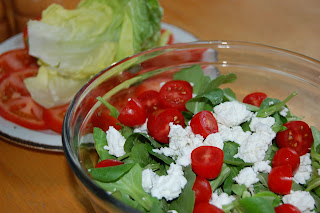 This was a simple dish. Using Blue Bell Homemade Vanilla ice cream, I simply placed blueberries and raspberries to suggest an American flag. 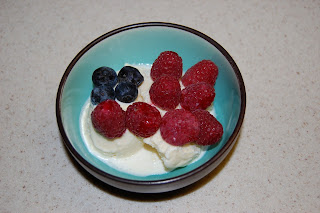 Are you sure you aren't related to my husband Chuck? You look a little bit alike around the beard. (grin) We had our All-American 4th of July yesterday afternoon/evening with some international flavor. Our "adopted" Chinese daughter Lei with her Texan husband Carl, their 3 yr old son Charlie (named after Chuck), their 5 week old daughter Caroline plus her Chinese parents here from Hunan and her sister Gia here from Sichuen province.
Chuck and I both cooked until we were slightly red in the face (no blue faces in July in Texas). We had his famous bacon potato salad, cole slaw, cantaloupe & pineapple, chips & dip, sugar-free peach tea "sangria" punch with blueberries, raspberries & peaches in it, sugar-free apple pie (with Blue Bell vanilla ice cream) PLUS grilled corn, grilled Hebrew National hot dogs, grilled burgers and grilled Brats & Polish sausages. The sausages, hot dogs all disappears (almost) while I was finishing the burgers (too thick, and then I ran out of GAS! eek... had to finish them in the oven.) Oh well, at least most everything got grilled.
In an atypical arrangement at my house, my husband does most of the cooking except for salads, breakfast foods and anything sweet (he's diabetic). I grill or BBQ being the only native Texan in the house. He's a jewish Detroit boy who came to Texas to be journalist and stayed* over 30 years now.

As I read this, I was eating a freshly roasted ear of corn-which I soaked in water for an hour prior to grilling. Husks on, silk removed.

I do most of the cooking in our house and mostly the grilling, too.

I enjoy it and I'd do it all time permitting, but sometimes we need to share responsibilities and Helen is no slouch at the stove or grill. She's a pro.

We have a restaurant in Houston, the Red Onion, that does a great pineapple salsa, but I think mine is better because I make it a bit zippier. I also do a mango salsa.

Check out YouTube for etiquette on eating hot dogs!