I never pass up a chance to drive up to Austin, Texas, especially if it involves food. Now, Houston has over 16,000 restaurants and even the McDonald's are a cut above those in the rest of the world, but Austin has that eclectic mix of satisfying Bar-B-Que, Tex-Mex, Southwestern fusion and elegant dining all within the city limits.

For breakfast you can't beat Trudy's. There are two locations but my favorite is the ramshackle house on 30th Street. This morning, (YEAH, THIS MORNING!), I had the Migas Enchiladas which are corn tortillas wrapped around a generous portion of migas, covered in cheese and chipotle red sauce and baked. Served with refried beans and hash browns and a margarita. OK, the margarita is extra but what's a Sunday morning without a margarita?

This trip we were able to try out two restaurants new to us: Ironworks and Gumbos.

First, Ironworks. Ironworks BBQ is on the site of an old ironworks established in 1913 in the center of Austin. It's a rustic kind of joint. You pull your beer out of tubs of ice and take your food on trays lined with paper. Potato salad and cole slaw are served in giant cups. You're encouraged to clean up after yourself when you're done eating just like at home. The waitstaff are kinda scarce. The food, however, is unsurpassed. Delicately smoked ribs and brisket, and flavorful sausage links are hands-down favorites. Although open to the elements, the dining area was cool and breezy even in late July and somehow the fresh air made the food (and beer) taste all that much better. 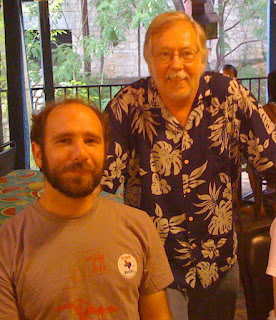 Nothing complements a good restaurant more than good company and at Ironworks I found that in spades. Here in Austin attending the Netroots Nation convention were my good friends and fellow bloggers Josh Rosenau from the National Center for Science Education in California and author and writer Ed Brayton from Michigan. It was good to see Josh again, and although I had never met Ed in person it was a double treat for me at Ironworks BBQ.

Ed commented expertly that Ironworks BBQ was the best of three BBQ restaurants he had visited in Austin this weekend. Judging from the chomping and gnashing noises, I would agree with Ed's assessment. 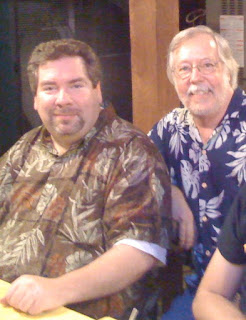 To complete my gastronomic visit to Austin we had a meal at Gumbo's Louisiana Style Cafe near the state capitol. If ever a restaurant was misnamed it was this one.

Don't expect to get out of this 4-star "cafe" without dropping a few bills or burning a large hole in your credit card. That said, the food was as outstanding as the service was lacking. By 4-star I mean that if you take a typical bottle of wine that you can buy at your local Kroger's and multiply the price by 4, you're at Gumbo's! I must say, however, that the wine list was extensive and our selection, a Pinot Noir from Oregon was exceptional, even at the inflated price.

Gumbo's is like the Home of Wine Reductions. So many of the selections involved wine reductions that I could envision huge vats of wine being reduced by slaving sous-chefs wielding large paddles. I picked Blackened Shrimp with Crawfish Etoufee and was not disappointed. The shrimp were generous and the crawfish supportive. Spiced with precision I hesitated to add a touch of Louisiana Hot Sauce, and reserved my abomination to a small portion. Additional hot sauce neither improved nor augmented the flavor I learned.

On the way home I snapped this lame picture of the Texas State Capitol at night through the windshield of the car. Do you have any idea how difficult it is to drive in traffic AND do photography? It's insane!

Yeah, those are Green Lights in the distance. It means, "Hey, go ahead and take a picture while dodging 18-wheelers! It's Texas!" 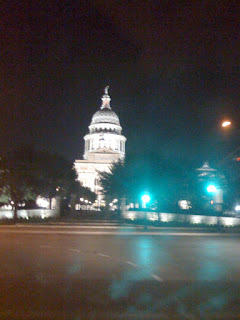 Next time you're near the capitol and don't want to spend so much (actually, I've never been to Gumbo's - never even head of it, so maybe it as worth the price), I recommend the Texas Chili Parlor. Great burgers piled high with spicy chili, in many varieties including Elgin sausage - yum!

OMG! I've been thinking of Trudy's Mexican Martini's...how funny that you were there. I miss my home so much. Love ya Austin!

Well if I was in Austin, I would head north to Round Rock and take a right (East) to visit one of the immortal BBQ joints of Texas: Louis Mueller's in Taylor TX.
http://www.louiemuellerbarbecue.com/ We're about to head south from Dallas to San Antonio. On the way I believe we're stopping in Lockhart or Luling for another one of the Texas giants of BBQ. I haven't sampled them all yet. My husband, the retired journalist, is guiding me. Amazing since I'm the native Texan of our duo.