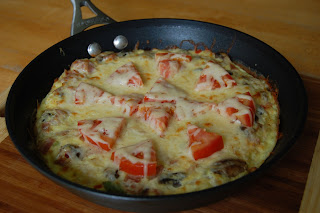 It’s a good thing as Martha would say.
Yum-O according to Rachael.
Delightful would say Julia if she weren’t dead.
Bam, it’s that simple, chimes Emeril.
You’re gonna like the way you look. No, that’s George Zimmer of the Men’s Warehouse. Wrong thread.

Over the years my omelette might have been described as great, groovy, radical, boss, tubular or sweet, although it’s not sweet-sweet.

Like most things ridiculous stupid, necessity is the mother of invention.

“What would you like for breakfast?” A simple question.

“How about a cheese omelette?” A deceptively simple answer.

Just cheese and egg? Seldom is the case. The key to taking a cheese omelette to the ridiculous or stupid level is the element of surprise. Cheese is the teaser, but it implies something else. A special spice, bit of meat, something unexpected that transforms breakfast into BreAkFasT!! Yum-O! Thanks, Rachel, uh, chop some mushrooms for me, ‘K? Thx.

At the very least the cheese omelette maker should forage through the refrigerator (new!) and pantry for scraps of this and that that need eating up.

And, thus, was born the ridiculous stupid omelette.

First, I chopped up everything and got some grits cooking. Hey, this is Texas. Kiss my grits if you don’t like them, or maybe fry up some leftover potatoes or do toast or a side of bacon or fruit. Knock yourself out. Thanks, Emeril.

This was a 4-egg omelette so I used a tablespoon of butter to grease the skillet. In went the chopped onion, bell pepper and mushrooms. After they softened a bit I tossed in the sliced ham, chopped into small pieces.

I beat the eggs in a measuring cup and added about a quarter cup of milk to thin it out a bit, then I added the egg mixture to the pan, mixed it up a little and turned down the heat to low.

Don’t molest the omelette. I always say that. Just let it sit on low doing its omelette thing.

When it started to dry along the edge and bubble in the middle I grated some Mexican quesadilla melting cheese on top and added some fresh tomato wedges. I figured I could use the tomato somewhere. Then I grated more cheese on top and put the entire pan in the oven under the broiler to cook the top and get the cheese bubbling.

I didn’t use any salt or pepper or any other spice during the cooking, although I could have been inventive. Turns out extra spicing wasn’t needed.

If I had to pick the special ingredient it would be a tie between red bell pepper and the Mexican melting cheese. The cheese is very mild but has a great melted texture, smoother than Colby or Longhorn which I normally use.

And that’s a good thing! 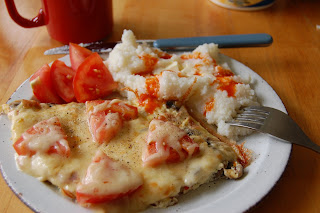 Bill - I love the use of negative words to describe something wonderful! Like Phat! And ridiculously stupid! Awesome! And men's warehouse? Perfect!
Amy

Reminds me of the time I experimented with an omelet for the kids - I added a little red wine and the whole thing turned green. The kids wouldn't touch it, regardless of how many times we reminded them of Dr. Seuss' "Green Eggs and Ham" story, and how good I told them it really tasted.

I'm gonna need a shirt that says that.

dang bill, I just had lunch and that makes my mouth water. Thank you so much. I am gonna try that when I get home!!!!!