From my friend Jerry Coyne's blog. Jerry, a kat lover, ran a contest to provide a picture and a 250-word story about your favorite kat. I wrote about Kink, of course, and who wouldda thunk it, Kink won! Here's the posting from Jerry's website:

December 11, 2010 – 10:08 am
I’ll announce the three winners of the kitteh contest today: the first two runners-up this morning (they’re in no particular order), and then the grand prize winner this afternoon. Winners: be sure to contact me via email to claim your prizes.

As I said, the celebrity judges had a hard time. There were about 85 entries, many of them awesome. Thanks to Miranda Hale, Russell Blackford, and Ophelia Benson for making the difficult choices. I’ll be highlighting many of the other entries over the next few months.

The first runner-up (and by “first,” I mean “presented first”) is the combination of Doc Bill (human) and Kink (cat). Remember that each entry comprised both a picture and a story. Here’s Doc Bill’s:

On the day I brought Kink home we stopped at the veterinarian’s office. Poor little Kink, barely 4-months old, had been poked and prodded all morning long and now had to suffer one more indignity before going home.

Putting Kink back into his travel container I commented idly that I needed to swing by the grocery store to get a box.

Geoff looked at me over the tops of his bifocals and asked, “Why?”

“Well,” I replied somewhat uncomfortably, “don’t kittens live in boxes until they can, uh, get around?”

Geoff regarding me as if a Bocydium globulare had landed on his knee said, “I suppose.”

We made our farewells and, shortly, Kink and I were home. Doc Geoff’s voice, however, was lodged in my skull, “I suppose.” Over and over.

That afternoon Kink made himself quite at home eating cat food until he could hardly walk, running up and down the stairs and playing with all the cat toys. He took a couple of cat naps but was ready for bedtime when we all turned in.

I walked into the bedroom with Kink and said, “You know, I think he’d feel more comfortable if he slept with us for a few nights.” I placed Kink behind my knees where he purred himself to the Land of Nod.

Four years later he’s still there and I can’t imagine it being any other way with my best friend. Thanks, Doc Geoff.

This is a picture of Kink on his first day in his new home: 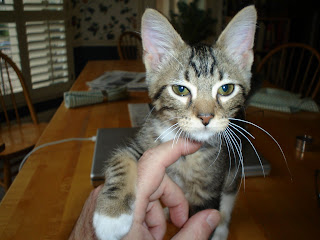 look at those awesome big ears! what a good looking boy!