I've always been partial to Adidas.

Eons ago a friend of mine showed up at class one day wearing a great pair of shoes. Bright white with three diagonal black stripes, they were quite striking.

"They're Adidas," he replied.

The word was unfamiliar. Adidas. What kind of word was that?

I did and was amazed. I guess you could jump higher wearing kangaroo skin shoes. Briefly, I thought about cute little kangaroos being cut up into shoes and put the image out of my mind. Poor Skippy!

The next thought that quickly followed was this:

A few weeks later I was at the mall, came across a shoe store (like about a zillion) and there they were in the window. Adidas white kangaroo skin shoes. Twenty-one bucks.

What? Holy shamoly! Back in the time "sneakers," "tennis shoes" or "trainers" ran about nine bucks. Twenty-one was a fortune. But, I was hooked. In I went and out I came with my own pair of Adidas.

Now, when Adidas first came on the market they were very rare. The sight of bright white leather "tennis shoes" was a novelty and I took great pains to tell people they were made out of kangaroo parts.

And so it went.

Me and Adidas, we're like that. I had those shoes for years and literally wore them out, tops and bottoms. They were in shreds when I bought a new pair. Eventually, though Adidas moved on as did we all and adopted other materials.

Now, I have a collection of Adidas Oddities. The Oddities are an interesting shoe. Playful but comfortable. The hardest decision I have to make in the morning is which pair I'll wear.

Today I made an astounding discovery. Since all the Adidas I own are the same size, why not mix and match. Or just mix?

The result is happy feet and the occasional explanation. 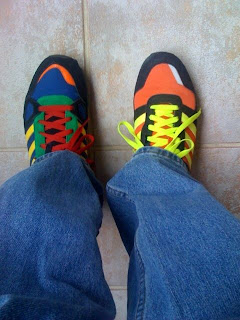 I love that you are totally rockin' the hell out of these shoes!

I didn't know men could be as fascinated by shoes as women.

As you walk into the front door of our house, you are immediately greeted by six pair of Addidas. And two black labs.

Awesome, that is sooo choice.