I was driving along, minding my own business, thinking about corn.

I was driving along, minding my own business, composing a menu for dinner.

Maque choux. That’s the ticket! Corn and onions and tomatoes and something else. I was starting to think about the something else when I realized I was driving along at 20 miles per hour.

You know, it’s illegal to drive at 20 MPH in Texas. Yes, it’s true. Even school zones are marked at 75 and you can get a ticket for doing less than 90. The speedometer in my truck starts at 50.

So, here I was cruising along behind a lady on a cell phone and joggers were running by laughing. Squirrels were throwing acorns at the cab. Kids on skateboards were doing ollies over the hood and grinding on the cargo rails.

Cell Phone Lady, meanwhile, was totally absorbed in her call and totally oblivious to the traffic stacked up behind her, the squirrels, joggers and skateboarders.

I switched to NASCAR mode and the announcer, his voice so clear...

It’s a fine day out here at Sweetwater Raceway and the excitement is building with only one lap to go.

Ricky Billy is right on the tail of Cell Phone Lady and it looks like he’s going to attempt his trademark move, the Switch-a-Roo. Yes, Ricky Billy has downshifted and pulled out to pass Cell Phone Lady taking advantage of the left turn lane green arrow!

It’s a gutsy move but if anybody can pull it off it’s Ricky Billy. Look at him go. He has got the arrow and is home free!

But, wait! Cell Phone Lady still has a few tricks up her sleeve! She’s making an illegal left turn from the right lane without signaling! Brilliant! Ricky Billy is going to have to brake hard to avoid a huge fireball and, sure enough, he throws out the anchor, screeching to a halt only inches from the pedestrian crosswalk.

Cell Phone Lady doesn’t even look back and sails through the green arrow and under the checkered flag for an unexpected win to this exciting NASCAR event!

Ricky Billy looks pretty upset there at the pedestrian crosswalk and if I didn’t know better I’d say he was swearing in bad French.

The NASCAR announcer faded into the background.

After a cycle of the traffic light I arrived at Kroger’s, slightly rattled, to pick up ingredients for dinner. Corn, onions, tomatoes and something else.

The veggie section of the store was just being stocked and everything looked great. Fresh corn, onions, tomatoes and okra.

Okra! That’s it! The missing ingredient. Great, now I had all the stuff I needed for my maque choux.

Returning home without incident or crazy Cell Phone Lady drivers I set about to prepare the maque choux.

Sauté the onion, corn, celery and pepper until the onion and corn is caramelized. Add the remaining ingredients, cover and simmer for 20 minutes or so. Add some water if the mixture looks too thick or dry.

This batch turned out particularly well and I couldn’t wait to serve it.

Then, the questioning began.

With okra? And sage?

Well, yeah, with okra. Doesn’t it always have okra?

No. Your okra and tomato thing has okra in it. Maque choux just has corn, onion, tomatoes and thyme. No okra. No sage.

Are you sure, I asked, before I thought that question through?

Definitely. Here look at the recipe.

Ah. I guess rather than a near miss I had a collision after all. I call this Okra Tomato Thingie Maque Choux Collision. What do you think?

I think it’s very good but would be even better without the sage.

Yeah, but then it wouldn’t be a collision. 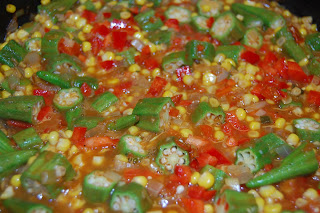