At the Savoy de Mesilla in Las Cruces, New Mexico, what was there on the menu but this -

To be honest it could have been "Bacon Wrapped Anything" and I would have ordered.  The description went on to say that the bacon was "jalapeño flavored" meaning it would be a little spicy. My imagination shifted into high gear.  Sweet, succulent dates wrapped in salty, spicy, crisp bacon.  What was not to like about that combination!

For years bacon was just bacon, although calling bacon "just bacon" should really be a crime.  But, that's the way it was.  Bacon at breakfast, fried and served with eggs, pancakes or waffles (or all three!), or bacon crumbled on salad which in my humble opinion is a waste of perfectly good bacon.  For sure the bacon looks good on lettuce's CV, but not so much lettuce on bacon's.

Anyway, getting to the chase the presentation was outstanding and the bacon wrapped dates were even better.  See for yourself. 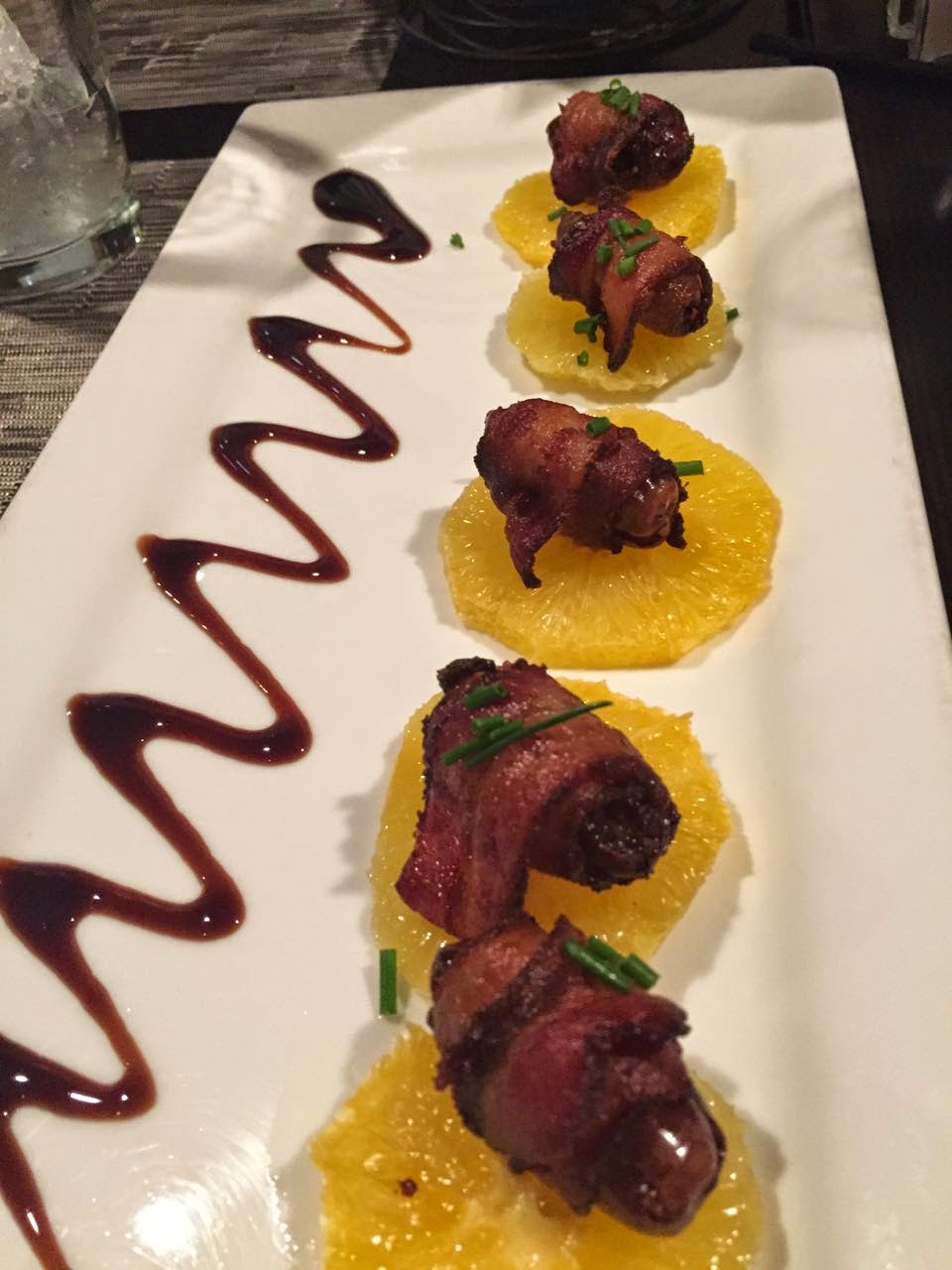 A less glamorous but as addictive bacon treat was discovered earlier in the year at the Silver Fox in Casper, Wyoming.  The menu read -

"What are bacon knots," I asked the waitress innocently?

Her eyes rolled back in her head, she started to make gurgling noises and drooled a bit just before going into a Meg Ryan impression from "When Harry Met Sally."  You know the one, don't pretend you don't.

After she regained consciousness she began to describe with all the tenderness and love of recounting her first kiss in the 8th grade with Lance how thick-cut bacon was literally tied into a knot, dredged in brown sugar and baked in the oven until done.

She was still in a trance when I asked, "Overhand?"

Returning to the Land of the Living with a visible startle she looked at me and said, "What?"

"Overhand," I repeated, "is the bacon tied with an overhand knot?  Or do you tie two rashers together with a square knot?  Ever tried a bowline?"

She looked at me as if I were from Mars speaking Sanskrit and said huffily, "A knot.  Just a knot.  Do you want to order some or knot, I mean not?"

Yes, please, we said and make it a double.  I refrained from making a double-knot pun because I had used up all my Good Will tokens.

Moments later our bacon knots arrived and we were not disappointed.  The bacon was cooked to perfection and the brown sugar had left just a hint of a glaze.  They were not too sweet at all and I could see doing bacon knots with a sprinkling of cayenne pepper or chipotle chili powder.

The surprise was the knot.  I wondered why bacon wasn't simply dredged in brown sugar and cooked in strips.  However, there was something about eating the knot that was magical.  It was like eating something bacon wasn't supposed to be.  Bacon could be a strip, wrapped around something or crumbled, but not served in a "chunk" like a knot.

It seemed a little naughty or "knotty" to throw out one more bad pun.  The bacon knots disappeared quickly but "knot" before I managed to preserve one for posterity.

I give you The Bacon Knot - 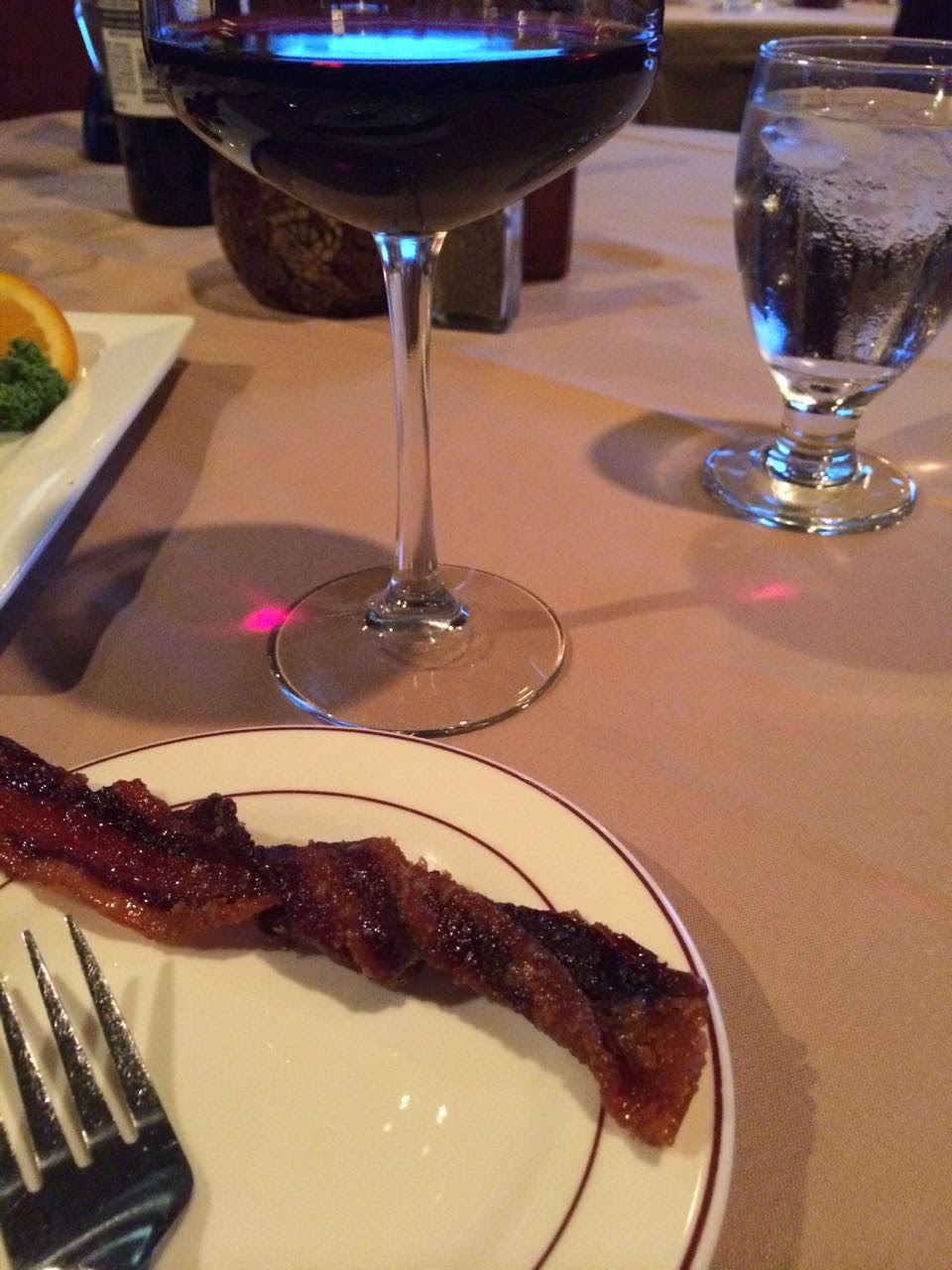