A kid on a street corner in London held out a red charity canister asking for a donation.  Next to him was what looked like a scarecrow:  pants and a shirt stuffed with something, a crude head and a hat.

I had no clue but dug in my pocket for a coin, brass if possible.

That was my first introduction to Guy Fawkes Day, an English celebration of the day, November 5, in 1605, when the hapless Fawkes was captured underneath the Houses of Parliament guarding a cache of gunpowder he and his fellow conspirators were planning to use to blow up parliament and the king.  Guy Fawkes and his confederates were executed a few months later, but the audacious plot captured the imagination of the population and the day has been celebrated by fireworks, parties and charity collections asking for a "penny for the Guy," a Fawkes effigy.

A failed pyrobolist, Fawkes succeeded in providing an Autumn celebration, making an excuse to set off fireworks and to have a bit of fun.

Blowing up buildings in the 1600's was nothing new, actually a pastime of sorts.  Not without its hazards, of course.  A particular kind of bomb called a petard would be carried to a castle wall and the fuse lit.  Premature explosions were an occupational hazard for the sappers who dealt with petards coining the phrase "hoist by one's own petard."

During the siege of Corfe Castle, sappers dug successfully under one of the towers and set off a huge charge.  Unfortunately, the tower was very well constructed and simply sank about 5 meters entombing the attackers who are, apparently, still down there. 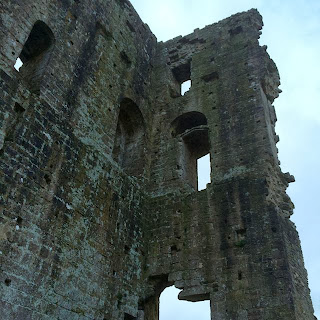