Those items are "fixed" on the menu and subject to change only after an experimental phase followed by general consensus.  The green bean casserole, for example, was added several years ago after a couple of years as an unofficial side dish.

Molly's cranberry relish was added last year as a trial and survived another year as an experimental side.

Here are things that were mistakes from the get go:  goose, fish, ham, turducken and anything not turkey.  Mashed potatoes - not a hit.  Grilled yams with mango sauce - just say no.  Roasted potatoes and carrots were once on the list, but have fallen out of favor in the last decade or so.

I once offered to smoke the turkey.  Vetoed.
How about deep frying the turkey?  Uh, no, no and No.  En Oh.
We could go out for dinner.  Sure, and we'll skip Christmas, too.  Not a chance.

Thanksgiving Dinner is something we look forward to all year long.  It's just not the sort of thing you'd want to prepare every day or even once a month.  It's too special.  Of course, in a few short weeks we'll be doing it all over again with Christmas Dinner but, you know, we're already looking forward to that! 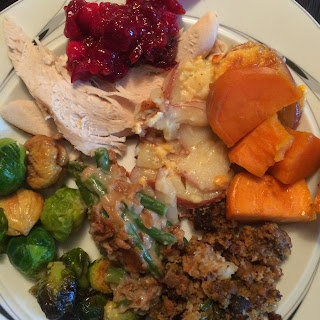