You think it's Christmas, already?

Of course, I'm overreacting to the inevitable that's been inevitable for over a month, now.  Yeah, I've seen Christmas displays in a few stores as early as late September.  At least if I act quickly I can get my opanka order in this year.  Missed it last year.  To slow.

There used to be an order to things, said me as the old man sitting on a park bench reminiscing to pigeons who only came for the breadcrumbs but tolerate the rant mainly because they speak Pigeon, not English, he said avoiding the obvious reference to pidgin English.

Anyway, there used to be an order to things and what kept the order was Elementary school.  Yes, it's true.  In elementary school there were four parts to the Fall semester:

1.  September with the beginning of Fall colors.  Stories about pioneers, drawing pictures of trees and coloring the leaves in yellow, brown, read, burnt orange (my personal favorite, go Longhorns!) and, for reasons I can't personally explain, magenta.  I think I just liked the name.

2.  October was the month of Halloween, duh, with drawings of pumpkins, Jack o' Lanterns, candy and all that stuff building up to the great night itself, lured by the promise of a 15-lb haul of free candy.

3.  November brought Thanksgiving with stories about Pilgrims, Indians, hardship and, of course, the great feast.  Who hasn't made a Pilgrim hat out of construction paper and worn it proudly.  Proudly, I say!

4.  December, finally, at long last, oh, how we have waited for you bringing us Christmas!  And like the previous devious months we had to wait until the end.  We sang songs, drew a thousand bad Santas, although, to be fair, we wouldn't appreciate a real "Bad Santa" until much, much later (Oh, my, little girl, you have been so very, very bad ...)  Then Christmas would slam down upon us in full fury - a candy fest, a present fest, a feast fest and all so overwhelmingly good that we would need an entire year to recover, prepare and dive in to it's decadent luxury once again.

But, now the Mall has gone and messed it up.  The Mall ignored September except for a pathetic Labor Day sale, as if anyone really cared about a day of work.  October was completely ignored.  And here it is, the month of the first Fall feast and, what?  Any turkeys to be seen?  No!  Any Pilgrims pilgriming?  No!  Just a big, fat, fake Christmas tree announcing to all the world that you have LESS THAN 60 SHOPPING DAYS LEFT BEFORE CHRISTMAS!!!

Begin the stampede, trampling the true order of things.

Well, not me.  I'm going to enjoy my November and ignore the other stuff.  I've got a new oven coming and into it I will stuff the biggest turkey I can find.  Don't worry, Mr. Tyson, I've got your back! 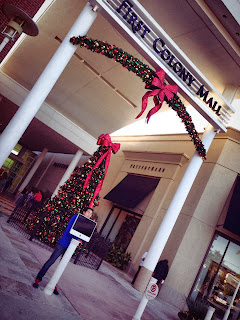 Appreciate the rant on "too early Christmas!" And the shout out to Tyson, who doesn't have anything to do with Turkeys, but whatev...