If we didn't have the Internet, Al Gore and I would have to invent it.

Truth is, of course, he beat me to it by >that< much. I had taken the weekend off to go tubing down the Guadalupe River with Tim Berners-Lee and that was the weekend Al made his move. The rest is history.

Well, not to be outdone this time I am officially a CNN iReporter. (Al Gore, alas, is not.)

I am among the elite few, about 175,000 of us, who comb the Planet for news stories to beam to the Mother Ship for the eventual dissemination to All of Humanity.

It's a heavy mantle, but I'm man enough to shoulder it without complaining too much.

Much of the news we iReporters iReport is local. Sometimes very local. But, you add up all the Local News and pretty soon you have Neighborhood News which rolls up into Community News and eventually explodes into Semi-Small-Regional News.

Today I've got my eye on a fire ant mound that's building in our neighbor's yard. It's definitely on his property because I snapped a chalk line from where our fence runs to the sidewalk. The fire ant mound is definitely on his side of the line although it's possible that microscopic fire ant tunnels extend to Our side which would be a clear violation of the Geneva Fire Ant Treaty of 1962. I've ordered an advanced sub-surface surveillance team to come in on Monday to do a survey.

Then I'll know for sure and you can put this in the bank that if a violation of the treaty has occurred I'll be iReporting it.

Here are the main questions in this unfolding drama.

Where is the Queen and Royal family? Have they sought asylum across the street? We don't know!

Has the mound been treated? It's difficult to tell, but judging from our neighbor's propensity to "let things go," aka the Great Mole Invasion of 2003, I suspect not.

However, I must now reign in my emotions and report only the facts. After all, I represent CNN, now, and the reputation of my fellow iReporters must be considered.

I've set up a Fire Ant Mound Watch and I'll be here all night on my lawn chair watching the mound. If the Royal Family tries to make a break for it I'll be right there to document that historic event and post my story to CNN where you can read it first hand.

Don't worry about me. I've got a Thermos of coffee, my trucker's MagLight and, more importantly, the determination and experience of an iReporter to wait these things out.

I won't let you down. 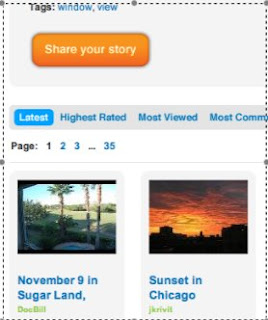 I must say...you are keeping busy in retirement! I only hope to be as good!