The other day Al and I were reminiscing about how we created the Internet all those years ago and the marvelous change it has brought to the World.

I brought out a couple of beers. Al had just about polished off the chips and dip. Mental note for next time: supersize.

Al was just finishing a long, shaggy dog story about international policy and the time Henry Kissinger got his coat caught in a taxi cab door and, subsequently, nearly broke the land speed record for the 100-yard sprint, I interrupted.

“Hey, Al,” I said, “remember when we were trying to work the bugs out of email and Tipper kept sending us all those cookie recipes? I mean, it was like 50 a day!”

Al chuckled and took a pull on his longneck, “Yeah, that was funny. She thought we really wanted that stuff and we had to invent the email trash can just to deal with ‘em.”

I put my feet up on the porch rail and looked out over the setting sun. Al concentrated on the dip bowl and was pretty successful in scraping off an atomic monolayer of dip on the last chip.

“Stroke of genius,” I said randomly.

“What’s that?” Al said distractedly. He looked like he was trying to decide if he should eat the last chip or frame it.

“It was a stroke of genius how you got Tipper to stop sending us cookie recipes.”

“Well,” I continued, “it was obvious she was never going to run out of cookies. Peanut butter, sugar, oatmeal, chocolate chip, snickerdoodles. I mean, it went on forever.”

“Mmmmmmm, cookies ... “ Al had that glazed donut look in his eye.

“What, bofus?” Al replied in reflex.

We both laughed at that!

“What I am referring to, Al, is how you got Tipper off the cookie train and on the potted meat train. Remember that? Pork ears, snouts, feet and ‘parts’ and stuff.”

“Parts is parts,” Al said, “I remember inventing that, too. Just smooch them all together and you’ve got...”

I continued, “How many potted meat recipes did she send us? A thousand? Ten thousand? And how about all those recipes that included stock tips and offers of cheap pharmaceuticals and chain letters, oh, I almost forgot about chain letters!”

We were both laughing pretty hard.

“And you know the best part, Al, my old buddy?”

Al was guffawing so much tears were rolling down his jowls and he had developed a bad case of hiccups.

“The best part is that you, Al, are credited with creating the very useful Internet feature, The Browser Cookie, and Tipper got...”

I could hardly get the words out.

We paused, looked at each other, high fived and shouted together, 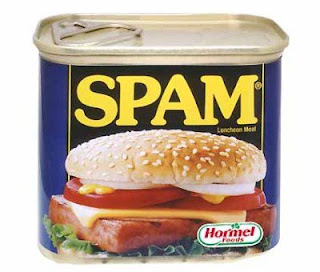