This is a Party Alert!

Twelve Two Two Fondue will be held exactly one month from today on, you guessed it, December 22nd!

Twelve Two Two Fondue began as a fondue party on December 22, 2004 and has continued annually since.

This will be Twelve Two Two Fondue VI. Sort of like Rocky VI but with food and a plot.

You are all invited!

You are all invited around the World to host your very own Twelve Two Two Fondue party and webcast it, send us live pictures, stories, videos and your leftover cheese. (Waste not, want not. I always say that.)
It's twue that 12-22-fondue has been hosted in many countries and on all Seven continents. And, yes, I do count my friend the Polie who at least thought about eating cheese while in Antarctica. The penguins, of course, ate Fish Tacos.

So be there or be square. The Fonduemeister commands it. 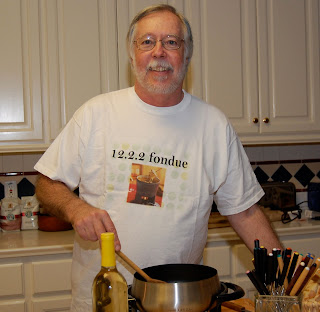 Can you please post the rules for the 12.2.Fondue?

I am not the Fonduemeister, but I have been to this event.

The rules are...
Invite friends over, make a big pot-o-cheese, lots of wine and champagne, and the rest just happens!

Citizens of Sugar Land - brace yourselves for a cheese shortage.