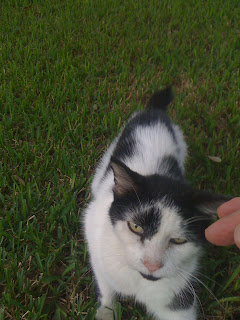 Short version: We raised Nobbs from a kitten. He ran away.

A longer version: We moved to Houston about a decade ago when housing was tight and found "a place" to call Home until we could find "another place" to call Home. In the 18 months we lived at "a place" our cats, Nobbs and Sandy, staked out their territory. Sandy, more of a homebody, staked out the kitchen and the couch. Nobbs, the explorer, ranged about a mile in radius. He could be sighted far and wide around the neighborhood, so much so that the kids on the next street over thought he lived there. They named him "Cow" because of his striking markings.*

After we moved to "another place" Nobbs was never quite settled and could often be found slinking around the old neighborhood nearly two miles away. His range had increased considerably. Nobbs was always a survivor and we called him the Dust Bin King of the neighborhood because of his uncanny way of living in the rough: eating out of trash cans, mooching off of people and living off the land. Nobbs had quick reflexes, sharp claws and a hair trigger. You'd cross Nobbs at your peril.

Nobbs would disappear for weeks at a time only to show up at the window ready for some chow and a long nap. Then he'd be off again. We found that he had taken up residence at another house in the neighborhood and his absences grew longer and longer. Finally he stopped coming home altogether.

After about a year he showed up in a yard and I saw him as I drove by. I stopped and called him and he trotted over as if he owned the place, which he did. He was wearing a collar with the name "Domino." Nobbs, Cow, Domino - he's a man of mystery. I went on my way and he went on his.

Another year passed without a Nobbs sighting and we figured either he moved to a farther neighborhood, or his adopted family moved or he had gone to the Great Dust Bin in the Sky.

Recently I was driving through the neighborhood and there he was, big as day, sleeping in the tall grass. I pulled over, got out my camera and gave him a call. He perked up his ears, trotted over and gave me a rub around the ankles as if we were old buddies. Then he turned tail, walked into a flower bed and went to sleep.

What a character. One of these days he's going to show up pawing at the window for some chow and a nap and, you know, he's welcome to it.

*The name "Nobbs" referred to a peculiar broken bone at the end of his tail that fused into a knob. Later in life he got his tail caught in something and it had to be amputated, the stub of which is seen in the photo. What's with our cats and strange tails?
Posted by Bill at 10:02 PM

We have regular tails. I guess only the Farrell cats have strange tail stories. Nobbs, Kink, and now Sandy.

I showed this to Jess who said, with the air of someone who is in on the secret and wonders why it's taken ME so long to hear about it,

"Oh yes, Mr Bill told me all about that cat. He's a Very Interesting Cat, you know."