A report on National Public Radio the other day reported on something I've known intuitively for years: sandwiches taste better if they're cut diagonally.

Triangles taste better than rectangles? Apparently so! It was on the radio. Must be true.

The reporter even went so far as to dig up (literally, I think) an historian who argued that the triangle was one of the original Platonic Solids and, thus, by dint of being Greek, I guess, tasted better. I never knew one could have a Platonic relationship with a sandwich, but there you have it. It was on the radio. Must be true.

Sandwiches taste better if they're cut diagonally. Furthermore, people know this either innately or by experience which explains why people preferentially select triangle-shaped over rectangle-shaped sandwiches.

I pondered this for quite a while, several minutes at least, and mused about my own sandwich eating preferences and concluded that I must operate at a simpler, less Platonic, level. Call it "reptilian."

I tried to harken a time in which I thought, "Ah, the Rectangle! Four 90-degree angles on the inside, four perfect corners on the outside. My, oh, my is this sandwich going to be good!"

Nor, I confess, could I recall a time thinking, "Ah, the Triangle! Oh, and an isosceles Right Triangle at that. Why, bless Plato, this sandwich is going to be good!"

Nope. All I could dredge up were vague, disturbing images of my forked tongue flicking in and out, and then everything went blank.

So, being unable to confirm the NPR report, regardless of the fact that it was on the radio, must be true, I set out to conduct my own scientific study on Sandwich Shape Preference.

I started out by constructing two identical sandwiches: turkey salad with tomato, avocado and Romaine lettuce on home-baked wheat bread. (See Figure 1, below.) 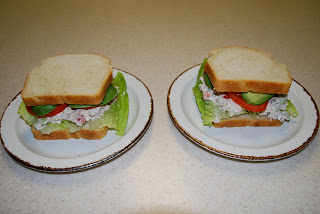 Next, using my best English steel carving knife honed to surgical standards I cut one sandwich perpendicular to the crust to form two rectangles, and the other sandwich was cut along the diagonal to form two triangles. Identical ingredients served on identical plates, the only difference being The Cut. (See Rectangle Cut and Triangle Cut, below.) 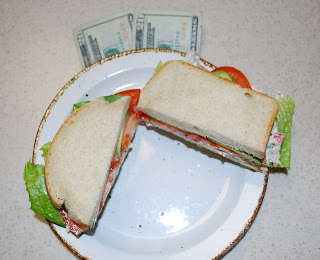 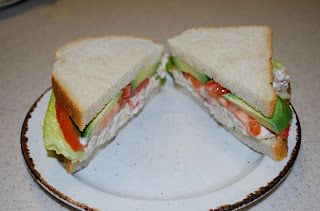 The next part of the experiment was a little tricky. I wanted to solicit the opinions of twenty people at random, but where to get twenty random people? Turns out the solution was right in front of my nose, rather, my house.

On a Sunday there is a continuous parade of neighbors out for a stroll or walking their dogs. All day long. Back and forth, often the same people. Very random and very perfect.

So, I decided to stop people as they walked by the house to get their opinion and settle the sandwich shape debate once and for all, scientifically.

Now, do you have any idea how many people either start walking faster or even break into a run if you stop them and ask a simple question like, "Do you want to have a look at my turkey sandwich?"

Seriously! After an hour I had to change my approach totally. First, be polite. Second, sound more scientific. Third, invoke authority.

"Excuse me, sir or madam, would you be interested in offering your educated analysis for a project somewhat under the guise of PNR?"

"Are you working under the auspices of N-P-R?"

In no time I had twenty considered opinions and the results were both unequivocal and conclusive.

I know, I was shocked, too. This shakes my faith in radio. Can nothing be trusted? What about Plato and the Solids and the aesthetics of triangles over rectangles. Was that all just hype? What else has NPR got wrong? Does this mean that in Lake Woebegone the women aren't strong and all the children aren't above average? Or instead of Wait, Wait Don't Tell Me we should tell people right away? Should Science Friday be on Wednesday? Should we only consider Some Things?

Clearly, the conclusion to be drawn from this scientific experiment is not to accept things at face value. We must place a higher premium on skepticism. We should all move to Missouri. There's more at stake here than Triangles or Rectangles, Boxers or Briefs. I believe that we are talking about Civilization or Savagery.

Seriously. Think about it.

In conclusion let's contemplate the once-maligned Rectangle whose tarnished reputation was given a slight buff today. Here's to you, Rectangle, well done! (See the Winner, below.)

Sandwiches should be cut vertically, not horizontally - it distributes the top crust evenly.

I think your results are contaminated by your location. Obviously the vertical cut is more visually appealing to the eye and since you eat with your eyes first... The problem arises because the horizontal cut looks larger and since you are in the state of LARGE (no insults or judgments intended here)your results were skewed.

Jess says she doesn't mind what shape your sandwiches are but thinks it would be more fun if you repeated the test with a marmite filling instead.

And I say: forty bucks? Sweet!

Clearly the issue is your two non-matching hemispheres of said turkey sammich. The top half is actually a half circle and the bottom is a rectangle. Rounded edges are more pleasing. Disney proved this with their research of name tags. People with oval name tags were much more frequently approached than those with badges with hard , sharp right angled corners. You've skewed the experiment with round top bread. You should have used Batter Whipped Sunbeam blocks of bread as a control. You also should have made Fluffernutters for the test.