New Yam in the Hood

First there's the Petition to Substitute which has to be signed by at least four people.

Then you have to get past the Recipe Review Board and the Intolerance Panel.

Fail to follow protocol and you could be looking at sanctions ranging from a few hours of Normal Family Derision to twelve months of Hell To Pay or a permanent place on the Wall of Remembrance.

"Remember when we had asparagus mashed potatoes?"

"Ewwwwww! Or how about the garlic cheese cake?"

"My favorite was the peanut butter stuffing. We had to throw away the entire turkey."

"No, no! My favorite was when the oven got switched off by mistake and nobody noticed until it was time to eat and the turkey was all raw and everything. Remember? We had to eat a cheese ball and drink beer until the turkey was done. Wait a minute, that wasn't so bad. Never mind."

Surprisingly, those mini-disasters did not qualify for the Wall of Remembrance. No, the Wall is a special place for Memorable Meals such as:

Scorched Cabbage with Pork that required the house to be aired out. In December.

Goat Neck and Honey Stew. Putting the "ewwwww" in stew.

Peanut Butter Salsa ice cream. No, it didn't taste better than it sounds. Worse. Much worse.

Cantaloupe Cream Soup in the Shell. One of those few things that actually tasted better coming up than going down.

As I am the only one in the family who not only enjoys but looks forward to my Special Candied Yams, a recipe honed to perfection over 25 years, I decided that it would be a safe bet and easy sailing through the Review Boards to propose a change to the "yam" part of the meal.

I was right! Not an eye was batted when I proposed grilling the yams outside and serving them with a smoked chipotle pepper cream sauce.

"You'll be grilling them outside?"

"Yes, Madam Board President, outside."

"Well, anything you do with a yam outside is fine by me. I presume you won't be bringing them back inside, then."

"Uh, negative, Madam Board President, the yams will be returned to the domicile whereupon they will be relegated to their own serving dish so as not to, uh, so as not to, that is, uh ... "

"Yes, Madam Board President, thank you. 'Contaminate' the other delicacies."

Madam's eyes narrowed, her lips pursed as if sucking a very large lemon through a very small straw.

"Very well. Permission to Substitute granted for a probationary period of one meal. Case dismissed, next case!"

Great. I had permission, a plan but no recipe. More of a vague notion. Grilled yams and a spicy red sauce. I consulted my sidekick and expert chef, Emeril LeGoogle.

In short order I had a recipe put together but, alas, no experience. The Wall loomed.

Sauteé onions and garlic in a little butter. Put to one side.
Peel peppers and discard seeds, stems and skin.
Blend in a food processor onion mixture and peppers.
In a small skillet add cream and syrup to the mixture, blend and bring to a simmer. Sauce will be thick and you'll have to adjust it with cream and water.

I found the sauce to be a little bitter and thought lemon juice might help by providing some sweetness and tang.

Brush the yams with olive oil and season with salt and pepper. Grill on a medium heat 5-10 minutes a side, depending on the yam, and pay more attention to the grill than I did to prevent burned spots. Brush with more olive oil if the yams dry out. When cooked the yams should be soft enough to easily insert a small knife, fork, skewer, etc

Although I wasn't totally pleased with the sauce and I scorched several of the yam slices, I tried a distraction with a nice presentation. 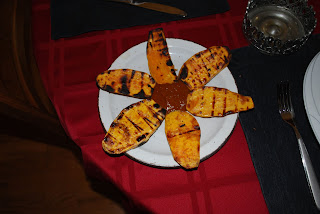 I prepared a serving for Madam Board President.

"Ummm," said Madam Board President thoughtfully, "as a rule I'm not a big fan of yams and, in fact, I'm a microscopic fan of candied yams."

Madam Board President fixed me with a stare and paused for effect.

I started to sweat.

She continued, "However, these yams are not quite as bad as I had expected. The spicy smoked pepper sauce complements the sweetness of the yam and they go together better than either one separately. To be honest, though, the sauce needs work and you'll have to improve it next time."

Next time, I thought?

"You are hereby granted a Recipe Extension for a period of one year to work out the kinks. Speaking of whom, where is Kink?" 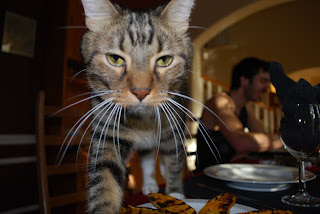 I've been following your blog for quite a while and enjoying your wealth of good recipes. When Foodista announced that they are going to publish the best food blogs in a full color book that will be published by Andrews McMeel Publishing Fall 2010, I naturally thought of you. This recipe would be a good submission! You can enter here: http://www.foodista.com/blogbook/submit

melissa@foodista.com
Editor and Community Developer
Foodista.com -- The Cooking Encyclopedia Everyone Can Edit`