Ariel is the house cat here in Leadville. I've known Ariel for about 16 years. Yes, we're both that old. You can learn a lot from an old cat if you pay attention.

When Ariel was a young kitten she was feisty and temperamental, but not psychotic like our cat Nobbs. Although a cat person (they call me the Cat Whisperer), I couldn't get close to Ariel without her displaying a lot of back-hunching, spitting, hissing and yowling. I get that a lot so it didn't bother me too much.

Fast forward 16 years and Ariel is the Grand Matriarch of the house. Regal, even though displaying a lot of back-huching, spitting, hissing and yowling. That's Ariel.

Imagine my surprise this afternoon as the sun swung around to the back of the house and warmed up the comfy couch that Ariel hopped up next to me and settled down for a nap. Awwww, how nice. I thought about giving her a scratch on the head but she opened one eye and gave me The Look.

Happily bogging away next to a royal visit by Ariel we were both interrupted by a group of adventurous hikers planning an expedition into the wilds of the Valley.

"Hey, you lazy bum, get your coat and boots on. We're going for a walk."

I looked around for an escape or excuse but there was none. Ariel gave me that special cat look knowing that she didn't have either a coat or boots and would not be going for a hike into the Valley.

Did I mention "in the snow?" Ah, yes, that's what makes a hike into the Valley special. Snow.

I made to get up but Ariel was quick with her front claw and snagged my pants. I looked down, she looked up: don't go.

Seeing my chance I pounced! "Hey, uh, I can't go because Ariel snagged my pants and, you know, that's so cute, and Ariel's being nice for the first time in 16 years I sorta hate to spoil the moment...," but I was cut short.

"Here's your coat and boots. Meet us on the deck in 5 minutes." And that was that.

Sorry, Ariel. Duty calls. I stood up and before I could take a step to reach my coat Ariel stretched herself out into the sunny part of the couch where I had been sitting and exhaled a long self-satisfied sigh.

In five I was on the deck, heading down the stairs into the snow and the Valley below. The snow was nearly two feet thick and we had to take giant steps to make progress. Mother may I? Yes, take two giant steps. Can we play Ministry of Silly Walks? By all means! As usual I lagged behind, following the footprints and holes in the snow.

We broke through the forest and walked through a dense thicket of willow. Hacking through the willows we made our way across the flats and up to the far side of the Valley. Yes, the view was spectacular. Yes, the snow was cold. Yes, I had lost feeling in my fingers and toes.

Noticing that the sun was setting fast and not wanting to be caught out in the forest as the temperature dropped we hastened back across the Valley, through the willow thicket and back up into the forest to the cabin.

I was cold, wet, snowy, somewhat numb and sweating from the exertion at high altitude. Dropping our gear off in the mud room we assembled in the main room for some water and a beer or three.

"Hey look at Ariel!" someone said, "She hasn't moved off the couch in 2 hours!"

Ariel looked at me and winked as if to say "And how was your afternoon?" 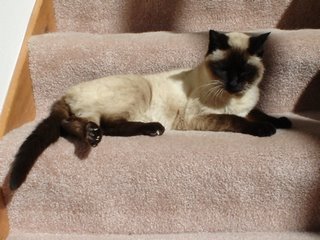 I dunno Bill, it sounds sorta like you didn't enjoy all that luscious snow you had. Not enough penguins in it for ya? ;-)

Don'cha just hate that? You wait and wait, and finally the day comes when normally reticent house kitty deigns to warm your lap. She's just done three circles and has settled in to put you both into a nice cat nap, when The Voice (is that you, or Bret?) summons. Kitty goes scrambling, and upon the completion of whatever menial chore was required, no enticement is sufficient to get her back on your lap.