Avogadro the Avocado was planted in the Spring of 2000 if memory serves.  Starting out in a glass of water propped up with toothpicks, then transferred to a small pot and finally to the back yard, what started out as an afternoon guacamole snack grew into a robust tree over the decade.

Avogadro grew steadily each year weathering two hurricanes, Rita and Ike, and other fluctuations in the weather.  I remember seeing the tree blown over to about a 30 degree angle from vertical during the incoming of Ike and braved the wind and rain to lash it down.

But not freezing.  Two years of hard frosts well below freezing took its toll on Avogadro and in the Spring of 2009 it looked like this - 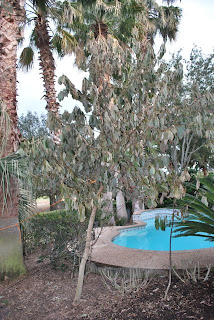 Avogadro had developed a good sized trunk and root system which held it up during hurricanes but the freezing weather wiped it out.  All of the leaves died and the branches never recovered.  By summer I resolved to cut it down and dig it up.

Cutting down Avogadro proved to be a task of a few minutes but digging it up was another matter because of the extensive root system.  I decided to let it sit for a year and try again later.

But, then, in 2010 something remarkable happened.  Avogadro came back from the roots. 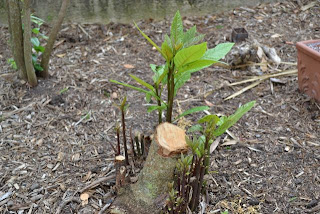 The leaves looked healthy and green.  The root system was obviously robust, so I let it go to see what it could do, and do it did!  Within a year the small shoots had grown up 5-6 feet and produced many leaves.  Today Avogadro is over 12-feet tall. 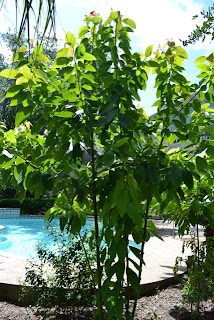 Here's to you, Avogadro the Avocado, indomitable tree you are and may you have a mild winter!