I'm told that every year.  Without fail.

A Thanksgiving dinner should be risk free:  roasted turkey, vegetables and desserts.  Simple.  No risk.

But nobody told me not to mess with the yams or sweet potatoes by another name.  Why?  Because, in general, nobody but me eats them.  I can do what I want with yams and over the years I've done just that.  My standard recipe is simple:  cut up yams dredged in flour, tossed with brown sugar, dabbed with butter, a little water added, covered in foil and baked with the final 30 minutes or so open to crunch up the top.  Just make sure they don't dry out and baste them every 20 minutes.  Not a great dish but certainly passable.

This year, though, I thought I'd mess with the yams because I came across a new mango/ginger/habanero sauce that I wanted to try and I figured that yams were the perfect base.

I was right.  I used less brown sugar and added a liberal dousing of Fischer and Wieser's "Mang O Nero" mango, ginger, habanero sauce and the rest, as they say, was history.

Not overpowering, the sauce complimented the yams perfectly, let all of the flavors come through and provided a nice, gentle zing at the end.  It's always a little tricky putting habanero in recipes because you run the risk of welding lips shut which is never a good thing. 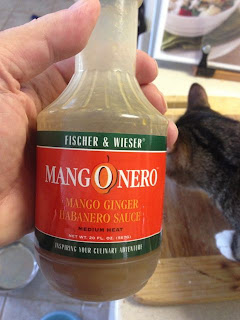